What musical instruments are the most difficult

Music is one of the most exciting and enthralling of a man of the arts. There is little that can compare with her in strength, she is able to thrill and to move, inspire or sadden, to cause reflections or conduct in a world of dreams. But that music can act on the audience, the musician needs to master his instrument, among which are very difficult to game the device. 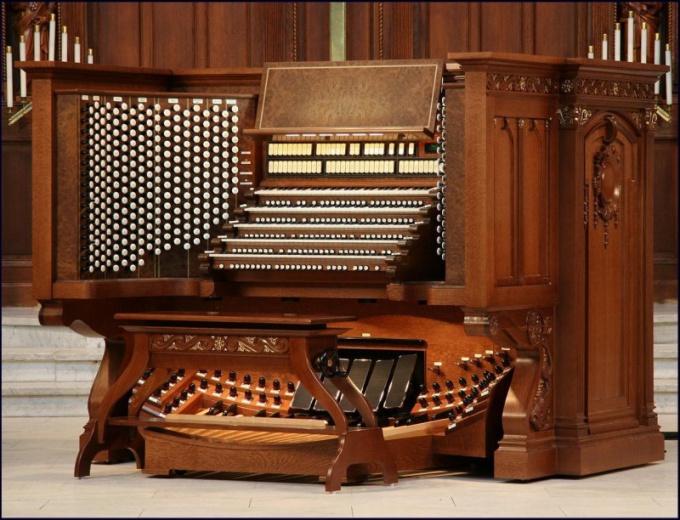 Instruction
1
Organ this musical instrument is considered to be the most difficult. To play it, use your whole body. The organ has several keyboards for the hands, called manuals, and a special keyboard for the feet. Latest is otherwise called foot. To play, the organist need special shoes. The body consists of a system of pipes, which can be made of metal or wood, there are pipes with reeds and without reeds. They catch the air through bellows, then it goes through the cavity so formed sound. Today are increasingly found elektroorgana, the difference of which is that air gets into the pipes, not through the bellows and through an electric pump. The organ is rightfully called the king of instruments, as the richness and brightness of the sound with him a little that compares. An additional difficulty is that organs in the world not so much for installing such a tool needs a special building. The apartment on for entertainment, not installed.
2
Piano is another very difficult for the performer of a musical instrument. Despite the fact that playing on it can the majority of those who study at a music school or Conservatory is still a very small number of musicians can boast that they have mastered this tool. Special expressiveness that is peculiar to the piano, is achieved only when the musician has not only technique, but also the ability to convey the subtle emotional works. Such a tool is of two types: piano, strings which are stretched vertically, and the piano where the frame with the strings positioned horizontally.
3
The saxophone is a difficult instrument, all the possibilities of sounds that people often underestimate getting used to hearing a certain style of performance popular in modern years. It kinds of musical instrument which belongs to the family of reed woodwinds. The saxophone has a very melodious, lively tone, and from the point of view of sound are hidden in this amazing opportunity. Created the saxophone was in 1842 by the master from Belgium named Adolphe sax. He patented the tool and called it by its name. In the 19th century the saxophone was accepted into the ranks of the Symphony orchestra, but more often it is used in a wind. Very bright side potential of the saxophone is revealed in jazz and related genres.
4
Violin is another instrument that is considered difficult. It consists of the body-cavity and the neck on which are stretched four strings. The game is made by four fingers of the left hand and bow in his right hand, which lead to the strings. The occasional five-string violin. The timbre of the instrument varies significantly from the upper to the lower registers. The violin came into the world of orchestral music of the people, is one of the oldest European instruments. In the 16th century, the violin was given to a single mind, but before that met a variety of their modifications. To play the violin, you need to have perfect pitch, and her technique of sound production – one of the most difficult of orchestral instruments.
Useful advice
They say that Bach was once asked, is it easy to play musical instruments. He replied that nothing could be simpler, just tap at the right time in the right places! It is not known how true this story but it is exactly what one technique mastery of the instrument is not limited, when the game touches my soul.
Is the advice useful?
Подписывайтесь на наш канал