How to grow hydrangeas

With good care hydrangea blooms all summer. It is important to know what conditions the plant likes. It is interesting that the hydrangeas prefer to grow in acidic soil, whereas many other flowers do not like such soil. 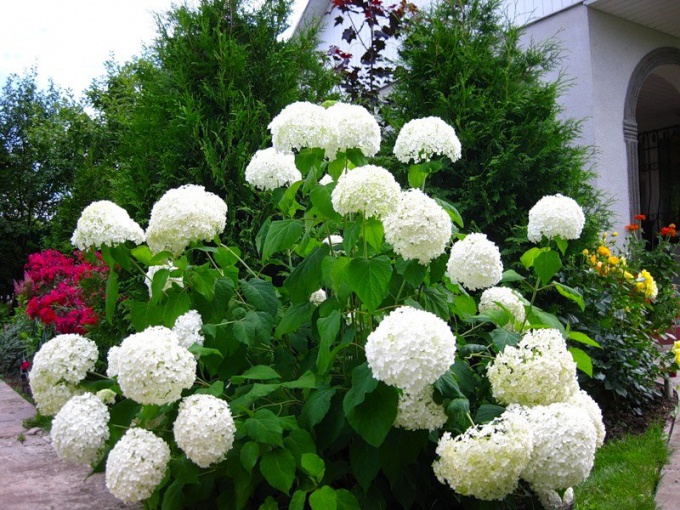 Related articles:
You will need
Instruction
1
Planting hydrangeas is carried out in 2 periods in the first half of may and in September. If you bought a small Bush in a pot, he had a closed root system, then you can fly from early may to late September.
2
Select the place. Hydrangea grows well in full sun and in partial shade light. Bush likes to get enough moisture, so plant where it has in abundance.
3
Dig a hole with a diameter of 50 and a depth of 60 cm If you want to place a few bushes, then plant them at a distance of five feet from each other. Fill the deepening of fertile soil. To do this, mix 1 part sand, peat with three parts compost. Add in the hole 1 tablespoon of complete fertilizer with trace elements. Mix the contents of the hole with a shovel, pour 5 liters of water.
4
Put the seedling, fill it with soil. The root collar should be at ground level. Pricenice plant. Do not remove the cover until acceptance of the Bush.
5
Water the plants abundantly. Under one adult – 10-15 liters per time. In dry weather do it every 5 days. Just season it is necessary to feed a hydrangea 4 times. The first time after winter give food to the bushes during a revival of the kidneys or in the early growth of the leaf mass at the end of April. Make nitrogen fertilizer mixed in 10 liters of water a quart jar of slurry. Allow the solution to stand for 3 days, then pour on the wet ground.
6
The second time to feed the bushes during budding. To 10 liters of a solution of slurry, add a spoon of double superphosphate and potassium sulfate. To the superphosphate is dissolved, first fill it with a liter of boiling water, leave like this for a day and then pour in the infusion of manure.
7
Third time pour hydrangea organic-mineral fertilizer according to the second recipe in the period of mass blooming floral brushes. Fourth time to feed the bushes at the end of August. In 10 liters of water dissolve 2 tablespoons of superphosphate and one of potassium sulphate. This infusion will help hydrangeas to overwinter better.
8
By mid-October, cut all the flower brushes. At the end of this month, cover the Bush with a layer of peat with a thickness of 10-15 cm If the winter remains harsh, put the top layer of dry leaves 5 cm thick, and on them – a few fir branches.
Note
Do not pour in the planting hole under the plant lime, because the hydrangea likes acidic soil. Lime also reduces the figure.
Useful advice
Will zaschite florets, cut part of the branches in October. Dip them upside down and place it in a dark ventilated place. A bouquet of dried flowers looks beautiful.
Is the advice useful?
Присоединяйтесь к нам
New advices