How to transplant potted hydrangeas

The beauty and abundance of flowers attracts hydrangea room, so the plant is becoming increasingly popular. Flowering in hydrangea under favorable conditions begins in spring and ends in late autumn. 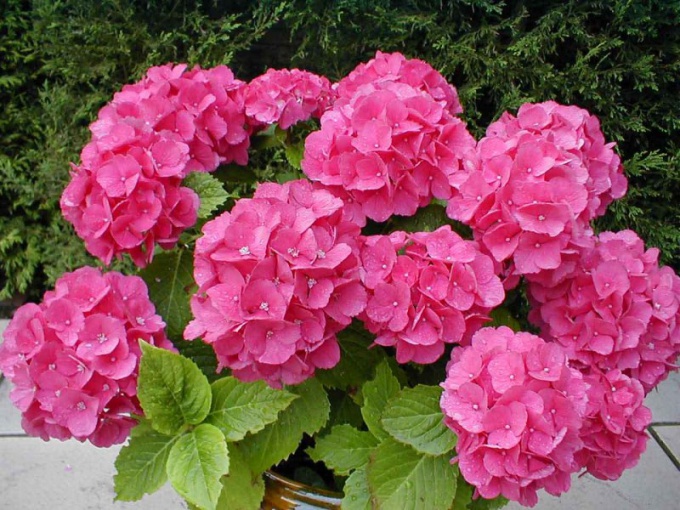 Related articles:
Instruction
1
The hydrangea is recommended to repot every year for best flowering, each time replacing the soil in the pot. It should be fertile, not sand, and the pot should be provided with good drainage. This flower prefers all the other acidic soil and will not grow in an alkaline. On poor, sandy soils will slow growth and flowering, most likely, will not. Room for content, hydrangeas choose a pot small depth, since the root system of the hydrangeas fibrous and superficial. To transplant the plant will need immediately in case you purchase it in the store. Hydrangeas are very often struck by the flour bug, and you want to exclude the fact of its existence, by reviewing the roots immediately after the purchase of the plant. Suitable for transplantation special soil for azaleas, and as the drainage layer need to use expanded clay balls.
2
Planned transplants carried out in early spring, before active growth period. Before you repot, choose a pot with a diameter of 1-2 cm more than the previous, and dried soil transplanted hydrangeas for 3-4 days. Then on the working surface, the wide windowsill, table or on the floor spread out newspaper, plastic or paper, so that later it easy to gather all poured earth. The pot is put on the center prepared for the transplant place and carefully take the hydrangea for the base of the trunk. Simultaneously, pot tip, removing the plant together with a lump of earth. If for any reason the hydrangea remains in the pot, you need to separate the land from its walls. To do this, lay the pot on its side and light taps on the side walls help to extraction plants. You can also use a thin ruler or a knife, carefully inserting them between a clod of earth and the edge of the pot and swiping in a circle.
3
After extraction of hydrangea from the old pot, you cannot shake the earth with its roots. If the hydrangea you bought it in the store and the roots you want to check, put it in a bowl of water and very carefully washed from the root system of the ground. When a planned transplant hydrangeas can transfer it into a pot along with a lump of earth from the old, if only dry land, not showered itself. On the bottom of the new pot is placed drainage layer with a minimum thickness of 3 cm, and it sometimes put a layer of chopped sphagnum moss or peat neutral. On peat, filled ground layer of approximately 1 cm and set at the center of the earthen room with the hydrangea. After that, holding the flower over the base of the stem, to fill up the ground to the desired level. We should not bury hydrangeas more than ever before, that its stem can rot. The ground after planting, in any case can not be compacted by hand, it can damage the roots of the flower. Hydrangeas sprayed and placed in a permanent place, starting from the next day a little water.
Is the advice useful?
Подписывайтесь на наш канал