What was the name of the three Musketeers

In 1844 was published a novel by Alexander Dumas "the Three Musketeers", which to this day is one of the most widely read books in the world. The Central characters of the novel were eighteen Gascon D'artagnan, who dreams of becoming a professional military, and his fellow Musketeers Athos, Porthos and Aramis. Subsequently, the history of the life and adventures of the beloved characters found continuation in the novels "Twenty years later" and "Vicomte de Bazelon, or Ten years later." 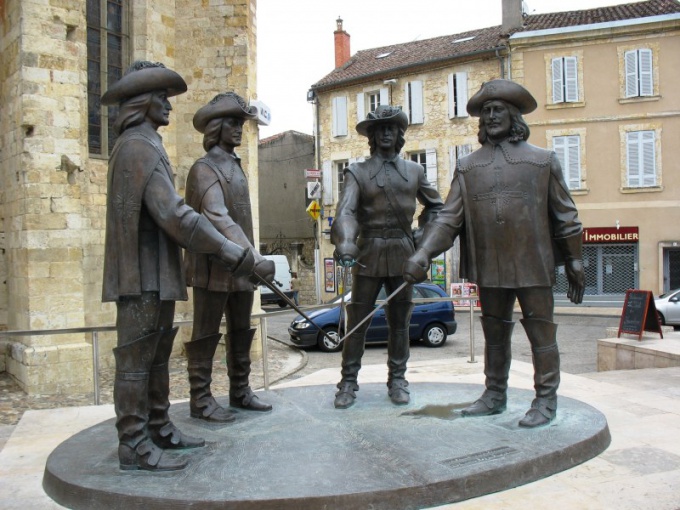 Related articles:
Instruction
1
The three Musketeers in the novel Alexandre Dumas from the very beginning presented as a very mysterious personality. They all serve in the company of Monsieur de Treville under false names, hiding their true origin, even from close friends. Only after a certain time, D'artagnan manages to learn the secrets of their comrades. Interestingly, all three of the Musketeers (as that of D'artagnan) was real prototypes.
2
The noblest and most mysterious of the heroes of Dumas is of course Athos. His name or rather nickname comes from the name of mount Athos in Greece. However, it soon becomes clear that the real name of Athos – Olivier, Comte de La fere, and he comes from one of the oldest noble families in France. The prototype of Athos is considered to be the real Royal Musketeers Armand de Sieg d’ Athos d’ Hauteville. However, he has little in common with the hero of Dumas. He never belonged to an ancient aristocratic family, and was only a poor Gascon nobleman, related to the real captain de Treville. By the way, the real Athos was killed in a duel before the real D'artagnan joined the Musketeers company.
3
The real name of the man and the epicurean Porthos du Vallon. After his marriage to the widowed Madame Coquenard, he buys himself the title of Baron and the estate and Bracieux Pierrefonds. Only then he turns into Baron du Vallon de Bracieux de Pierrefonds. However, all this has been going on the pages of the book "Twenty years later". Its prototype is considered to be a nobleman from Bearn Isaac de Porto, who became a musketeer at about the same time that Armand de Sallah. Thus, the real Athos and Porthos could be friends. In 1650 Isaac resigned and went back to Bearn. There he lived to 95 years, which in those days was a rarity.
4
The real name of the clever, handsome Aramis and remains unknown to the reader. In the novel "Twenty years later", after taking Holy orders, he became Abbot d Herblay. In the same book sounds and his name is Rene. On the pages of the novel "the Vicomte de Bazelon, or Ten years later," Aramis makes a quick career, becoming Bishop of Saint Malo is the proud and Duke d Alameda. However, the prototype Aramis was just a poor Gascon nobleman Henri d Aramic, as well as Athos, in a relationship with de Treville.
5
Of course, speaking about the three Musketeers, it is impossible not to mention the main character of the trilogy of D'artagnan. The original author gave him the name Nathaniel, but it's not like publishers and was removed from the pages of the manuscript. The prototype most popular of the characters Dumas was a gentleman from Gascony Charles Ogier de Batz de Kastelmor, maternal – count d'artagnan. He actually managed to make a brilliant military career, although he hardly possessed the intelligence and cunning of his literary counterpart.
Is the advice useful?
Присоединяйтесь к нам
New advices