The head louse is a wingless parasitic insect. In length the adult louse is 2-3 mm. Most often head lice are grayish-white and yellowish-brown. The head louse lives in hair skin scalp and feed exclusively on human blood. 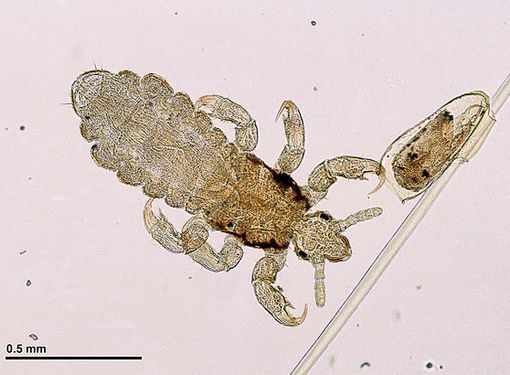 The head louse is one of two subspecies of the human louse. It is relatively harmless. Do not tolerate dangerous to human diseases. It differs from its closest relative of apparel (clothes) lice, which is a carrier of typhus and other typhus.

Cootie usually settles on a person's body or in his clothes. Hence the name. And head lice do not usually hybridize with each other. Although you can do it in the laboratory. Outwardly they differ little from each other.

The person can still infest pubic lice. Lives this unpleasant insect is most often in the lower part of the body. Pubic lice — a completely different kind of insects. It is visually distinguished from the head and the body lice won't mix with them. In their appearance of the pubic louse is much closer to the lice that infect primates.

Like most insects, lice are oviparous. Daily females lay 3-4 eggs. Attach them at the base of the hair owner. The eggs of lice in medicine designate the term NIT. Nits are somewhat similar to dandruff. Constitute a yellowish-white grains of about 0.8 mm in length.

The larva hatched from the nits, after half an hour able to suck human blood. At the age of 9-12 days the larvae become sexually Mature. Females can live about a month and to postpone during this time of 150-300 eggs.

Lice and its prevention

Infestation with human head lice is called pediculosis. Intestacy occurs as a result of the contact "head to head". Lice, quite nimble insects. Run with a speed of 23 centimeters per minute, so you can almost instantly change the owner. Fly and jump, contrary to popular belief, they do not know.

Very rarely is the infection through personal items. Head lice can live only in ideal conditions. For them it is a human head where suitable temperature and sufficient supply. Outside the ideal conditions for head lice within one or two days dies.

Personal hygiene does not affect the prevalence of head lice. These insects don't die in the water. Do not wash off and nits. So lice no one is immune, regardless of their social status and financial situation. According to some reports, head lice prefer clean and healthy hair. In unsanitary conditions feel more dangerous body louse.

As noted above, head lice great danger is not. Infection she can not stand. But in places the bite causes severe itching that causes discomfort in humans. When combing can appear purulent sores.

To combat head lice for many years has used chemical solutions containing insecticides. Now preference is given to drugs with a physical principle of action.
Is the advice useful?
See also
Подписывайтесь на наш канал