Was evil created by God

One of the most pressing problems of theology has always been theodicy. Literally, it means "bhoopendra", but more precisely it can be defined as the resolution of the contradiction: if God is good, why He created evil, and created it at all. If He didn't create it, why it is there – because all things created by God. 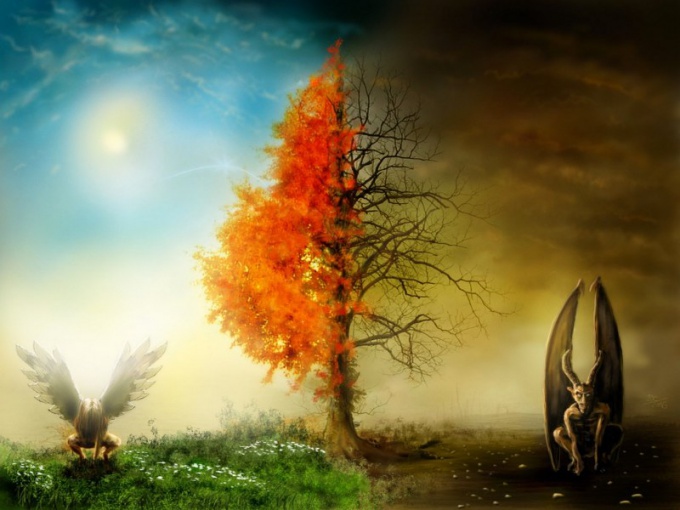 Related articles:
The ratio of good and evil often present within Hegel's law of "unity and struggle of opposites". From this point of view evil even seems to be a necessary element of Existence. It is noteworthy that most this view explain people who are not faced with real evil – not survived the war, became a victim of crime.

Taking this view have to assume that evil is some kind of independent entity, equivalent good. Based on this, for example, the Albigensian heresy: God (bearer of good) and the Devil (the evil) seemed equal to each other beings, and God and goodness was associated only with the spiritual world, and the Devil and evil material, including the human body. But this is heresy – a doctrine rejected by the Church, and not without reason.

The root of all evil

It seems that everything in the world – any object, any phenomenon must have an independent entity. This is partly due to human thinking, operating with concepts-generalizations, revealing the essence of things and phenomena. The fallacy of such representation even possible to prove on the example of physical phenomena.

Here are a couple of opposites – heat and cold. Heat is motion of molecules, and the cold less intense. Theoretically possible even a cold, in which the motion of the molecules is not at all (absolute zero). In other words, to define the cold, we have to use the definition of heat, cold is a small amount of heat or its absence, independent entities had not.

The same is the case with light and darkness. Light is radiation, a stream of particles. There are bodies which emit light of stars, spirals in electric incandescent lamps – but there is no single body in the Universe that would radiate darkness. Even black holes don't, they just don't emit light. Darkness also has its own entity, being the absence of light.

In light of these analogies it becomes clear the ratio of good and evil. Good is the natural state of the Universe, corresponding to the divine plan, and in this sense the goodness created by God. Evil is the absence of this condition, its destruction. Independent entities do, so it is impossible to create. Here is a man committed murder – he did not create anything, he has ruined the life. Here is a woman unfaithful to her husband – she again didn't create anything, she ruined my family... examples could be multiplied indefinitely, but the point is clear: to do evil, could not neither God nor anyone else.

Evil and free will

This understanding of evil raises the question about the reasons of such violations in the Universe. To some extent this is due to the very essence of Creation.

God created man in His own image and likeness. He did not create "robot", which can be programmed – He created a living, thinking, evolving being, make their own decisions. The same free will possessed and other intelligent creatures of God, angels, and this allows for them and the people to follow the Will of God.

The will of God organizes the Universe, and following it – the maintenance of order in the Universe. Referring again to physics, you may recall that the maintenance of any ordered structure requires energy. Following the Will of God also requires effort, which not everyone agrees. The first "dissent" was one of the angels is Satan, who thus fell away from God and became the source of destruction of the established world order.

People also regularly refuse to make efforts to "maintaining world order" at its micro level. "Be emotional" shouting and abusive words a lot easier than thinking about other people's feelings. Follow momentary carnal desire easier than a lifetime to take care of his wife and children. To steal money easier than money... and so is born evil. And no need to lay on God the responsibility for its creation – the evil people do to themselves, rejecting His will.
Is the advice useful?
Подписывайтесь на наш канал