Where to find the treasure

If you want to find the treasure, it is not necessary to travel to distant places. Often buried in the ground values are close enough, and they can be quite familiar to you. However, to your adventurous enterprise was crowned with success, for example, a coveted trophy in the form of deposits of rare coins, it is important to know what points to consider when searching for treasure. 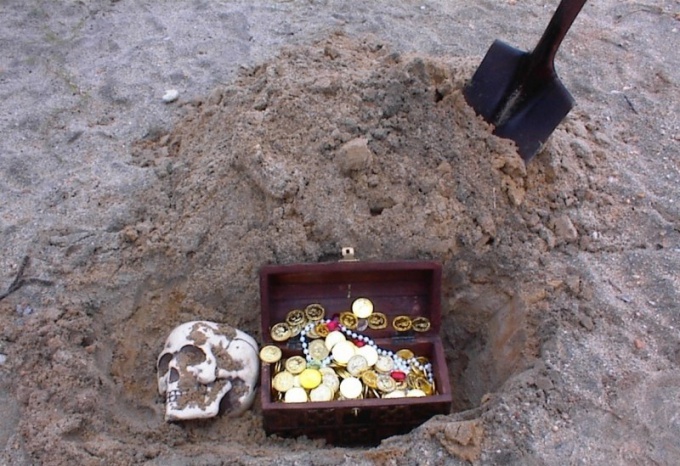 What kind of treasure you want to find?

First you need to decide on the word "treasure". What do you personally invest in this concept?

There are people for whom this word hides something big and powerful. For example, what it considers to be Spanish Galleons, Laden with silver and gold, or heavy chests and barrels filled with precious stones and untold treasures. If you are one of those people, you have to disappoint. Such predstavleniya arise from a distorted understanding of the term "treasure hunter".

When you search for treasure you will need to be able to clearly navigate to their findings, determining their true value. After all, the thing that initially seem frustrating, it can cost a fortune.

The fact that the treasure can be not only a sunken ship. They may be 2-3 normal with mean and very old coins of the reign of Peter I that you were able to dig up on my grandmother's garden with a metal detector. In this case, you have every reason to consider himself a real treasure hunt, and its a couple of coins – found treasure.

How to choose a place where there can be a treasure?

The treasure can be found in any, even most unexpected place. For example, this can occur quite by accident. So, the famous "glodoskiy belongings" found the usual farmer from Kirovograd region, when he works in his garden.

You can search for the treasure is specifically, for example, historically known places. So many treasure hunters carried out their work in the Sevastopol Bay, where in ancient times the Russian-Turkish war sank British ships with gold.

There are legends about the treasures hidden in the Volgograd region. As stated in the tales that are passed down from generation to generation, the locals of this region, in the Volga region buried treasures of the richest people of the past – Stepan Razin, Emelyan Pugachev, Batu Khan. So far, nobody's found the hidden treasure.

As the statistics of recent years, most costly treasures found in the city during the demolition and restoration of old houses. But the number of finds is leading the countryside. When looking at the rural areas need to understand the reasons of finding them treasures. For example, in the place where in the XVIII century was fair, may be not only rich in finds a clearing, but a couple of geocaches with jugs filled with money.

The best place to search for hidden treasure in the countryside - the old tract. The probability of the findings above, if the old deserted town or village was once destroyed during the war or, for example, of the revolution.

How to search for treasures in such places? To pinpoint the location of the geocache you will need a couple of cards large scale. The first of these should be the years of revolution and war, and one modern. Laid on top one card to another, you will be able to figure out which buildings were earlier this ruins or wasteland.

How to find the treasures

For search works you will need a standard for treasure hunting equipment. This GPS Navigator or compass, sapper shovel and a metal detector. If you're used to all be approached carefully, you can ask the old-timers of the area about their tales and legends. Out of a hundred legends, which will tell you, one can be the real story.

So, you've reached the destination - of the former town. Checking with your cards, try to pick up for study any plot. Start with a search with a metal detector. You might stumble on something valuable, even at the level of the turf.

When you search for treasure you will need to exercise self-discipline, attention and accuracy.

Best of all, if the place where you want to find the treasure, several hundred years of its history. In this case, in the soil under your feet you can find several hundred coins of various eras.

After that you can start to search clothing caches. Imagine a situation in which people in the past during the revolution or the Second World War, was forced suddenly and in a short time to leave their homes. The more urgent was the departure, the less things they can take with them. So the people just buried their belongings, hoping to pick them up later.

However, as practice shows, in 99 percent of the 100 similar caches remain forever and never come back. These treasures can get useful and amazing items. Here you need not just a metal detector, and the device is capable of operating at sufficient depth.

To know what you may stumble, you need to understand the mechanism of the creation of these treasures. Usually of different values and belongings were placed in strong chests or boxes. Right at home was dug a hole a decent size, in which people dumped their things, sprinkle them with stones, earth, etc.

To search for such caches are best in gardens and backyards, in sheds and in gardens. In some homes understand floor boards, a hole was dug in the Foundation. The boxes piled there. That is why it is important before starting the search of the treasure to determine the location of the old building and its outbuildings.

Even if the house blew apart, examined, where there were porch, yards, sheds. It is also helpful to turn your head and think, where is could have something to bury.
Is the advice useful?
See also
Подписывайтесь на наш канал