"Blue blood" along with "the white bone" is one of the allegorical symbols of the nobility, aristocrats. It is hardly necessary to clarify that the blood of the representatives of the noble class is no different from the blood of mere mortals, nevertheless, the definition of exist. 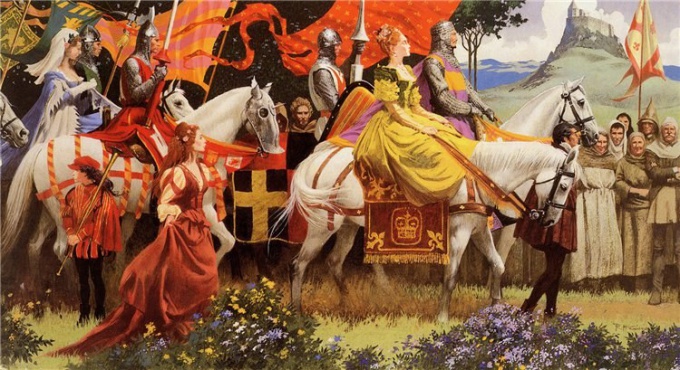 Related articles:
The concept of "blue blood" was born in the Middle ages. Its appearance is related to the ideas about feminine beauty that existed in that era. These views are radically different from those that exist now.

"Blue blood" of the middle Ages

Modern ladies spend time on the beach and even visited the tanning bed to acquire the coveted "bronze tan". This desire was very surprised to be the medieval ladies and knights too. In those days the ideal of beauty was considered of white skin, so beauty have tried to protect their skin from sunburn.

Of course, such a possibility was only for the ladies. The peasant was not to shop, they spent their days working in the field, so the tan was provided to them. This applies especially to countries with hot climates – Spain, France. However, even in England, the climate of the fourteenth century were quite warm. The presence of tan peasants still largely made of representatives of the feudal estates to be proud of their white skin, because it emphasized their belonging to the ruling class.

On pale and on tanned skin look different vein. We tanned person they are dark, and a man with pale skin they really do look blue as if they are flowing blue blood (after about the laws of optics people of the middle Ages knew nothing). Thus, the aristocracy with their snow-white skin and blue blood vessels, translucent through it, opposed himself to the commoners.

The Spanish nobility was another reason for this opposition. Dark skin where the veins can look blue, was a hallmark of the Moors, against the domination which the Spaniards fought for seven centuries. Of course, the Spaniards put themselves above the Moors were invaders and infidels. For the Spanish nobleman was a matter of pride the fact that none of his ancestors had not intermarried with Moors, not mixed their "blue" blood from the Moorish.

And yet the owners of the blue and even dark blue blood, there are on the planet Earth. Of course, it is not the descendants of ancient noble families. They do not belong to the human race. We are talking about shellfish and some classes of arthropods.

In the blood of these animals contains a special substance – hemocyanin. It performs the same function as hemoglobin in other animals, including humans – transport of oxygen. Both substances have the same property: easily combine with oxygen, when it a lot, and it's easy to give when oxygen is not enough. But a molecule of hemoglobin contains iron, which gives blood red color, and the molecule of hemocyanin – copper, which makes the blood blue.

Still, the ability to get enough oxygen from hemoglobin three times higher than that of emotiona, so the "evolutionary race" was won by red blood, not blue.
Is the advice useful?
Присоединяйтесь к нам
New advices