At what temperature to bake the cake

Sponge cakes, cookies, rolls are easy to do. One of the main conditions for obtaining delicious sweets – optimum temperature baking. If the oven is too hot, the bottom and top of the confection can burn and the middle will remain raw. 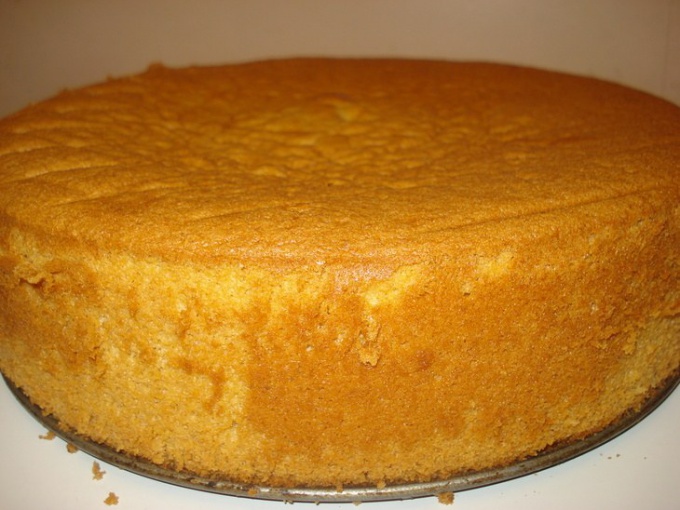 Related articles:
First you need to make the air the batter is the right consistency, and then send it in the oven.

It requires a little products only:

First you need to separate the whites from the yolks. This should be done very carefully. After all, if the protein will be at least a drop of the yolk mass, then the lush of the test will not work. If you happened to such trouble, then using a tablespoon, remove the uninvited drop.

There is a special form, which is a notch for the yolk and a slit, which will drain protein. It is easy to divide an egg into two factions.

The transparent part of the protein to remove while in the fridge, then he well get whipped. The yolk at this time, mash the sugar with a spoon, using a whisk or mixer. It is interesting to observe how a lot solar color gradually turns white and increases in size.

But it's time to engage and protein. So he is whipped, the mass has become dense, it is necessary to pour a little salt on the tip of a knife.

Now to the yolks add the flour and work first with a whisk and then a spoon. It was the turn of the whipped protein. First, we put in a lot of flour 2 tablespoons of air product mix. Now you can put the remaining foam cloud. Spoon it very carefully stirred. Her just twist in the hand, the movement "self". Then the mass will not fall and will remain air.

The dough is prepared according to the rules. Now it is important to know how to bake a cake. To do this, we must once again travel back to the creation process of the test and to turn on the oven before you start to whisk the egg whites and mix them with flour ground.

Oven for 10-15 minutes just to preheat to the desired temperature. It is equal to 180°. If you put the dough in a cold oven, then while it is hot, it will lose part of their bubbles and will not be lush. It may become soggy.

After the paste was in the oven, the fire doing little. Then evenly baked each part of the dessert dishes.

It is important during the baking of the biscuit is not to open the oven door, especially in the beginning. Because of the flow of cold air it can fall off. To view his willingness to turn the light on in the oven. If not, then in 20 minutes you can carefully open up the door. If the surface is well reddened, the cake is ready. Stick it in the middle with a toothpick. She remained dry? Then it's time to take out cool and gentle base for the cake.
Is the advice useful?
See also
Подписывайтесь на наш канал