What game console is better to choose PS4 or Xbox One?

The battle for customers in the market of game consoles between two leading companies - Sony and Microsoft turned out to be serious. At the end of the 2013 was released two game consoles of new generation Sony Playstation 4 and Xbox One. Each of the consoles has an incredibly powerful specifications and has its own distinctive features. Of course, to determine a clear winner in this fight is quite difficult, as well as to give a definite answer to the question, what kind of gaming consoles is better, but you can get a detailed comparison of both products and identify their main advantages and disadvantages. 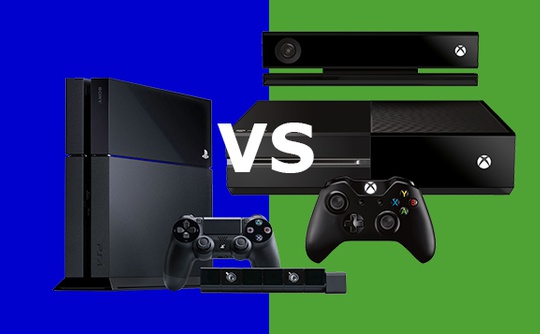 The design of both game consoles made in a similar style. If you do not take into consideration some minor details, the external differences are almost absent: they are a dark rectangular box, in appearance resembling VCRs, which were issued in the early 90-ies. On the front side of both consoles is the drive for Blu-Ray discs, and all necessary connectors for cables on the back side. However, the PS4 on the front also has two USB connector, which certainly makes the console even more convenient. Besides, PS4 is more compact and looks more graceful thanks to the "sloping" design and visual separation into two parts.

Xbox One and Sony Playstation 4 is equipped with eight-core AMD processor, hard drive 500 GB and internal memory of 8 GB. A distinctive feature of the PS4 gaming console is that it supports video in high definition 4K (3840 x 2160 pixels). At the moment the televisions, which are able to give such clear picture, is not yet widely spread because of its high cost. This move from Sony may well be a visionary and to help her in the competition with Microsoft.

The next generation console from the Japanese manufacturer now includes a new game controller DualShock 4 compared with its predecessor, has undergone many changes. New controller has a more comfortable size that will certainly will be a great advantage for people with large hands. In addition, on the front side of the controller has a built-in speaker and touch touchpad.

In gaming the Xbox One controller did not happen, some global changes compared to the gamepad from the console of the previous generation. Wireless joystick became more convenient to lie in the hands and faster to respond to commands, but to call these changes a significant update is quite difficult.

With regard to active video games, new Playstation Eye is now equipped with two cameras, which gives the ability to accurately monitor even small movements of multiple players. However, the viewing angle is only 85 degrees, and the minimum distance to operate the device – 30 cm, which of course is bad news for most Russians, with small rooms. In the device Playstation Eye has four built-in microphones, and to the already existing Playstation Move functionality added facial recognition and voice control capability.

System Kinest 2.0 the Xbox One is much more suitable for small areas as it has a fairly wide viewing angle. The device is able to handle traffic simultaneously six players to accurately convey even the slightest gestures, analyze the heartbeat and to distribute the weight on the skeleton.

If you use your computer operating system from Microsoft Windows 8 or mobile version of Windows Phone on the smartphone, the game console Xbox One will be for you a routine even on the first day after purchasing it. Its interface is a set of colored Windows, and in the eighth version of Microsoft desktop OSes.

Manufacturer from Japan does not disclose all the details of the operating system PS4 gaming console. But Sony is touting the new functionality that will allow players to interact with each other. For example, with a special Share button, you can upload photos and videos with the passing game, and also provide online broadcast of the game live.

Microsoft presented the Xbox One as a universal media device for the living room, so it is designed for a broad audience, including not only gamers, but fans of cable channels, social networks and other home entertainment. Xbox One includes a function Smart-TV – console supports voice control and multi-window interface, is able to call on Skype and more.

The Xbox Live service supports 300 thousand remote servers on which users can store the downloadable content, music, games and allows you to add up to 1,000 users.

This year, Sony launches new service Gakai, with which users will be able to run games from the PS3 to the new console generation, without waiting for their re-release. The Xbox One is such backward compatibility is not, and therefore will have to seek additional funds for the purchase of favorite games, but for the new console.

The simultaneous release of these two gaming consoles has put many gamers facing a difficult choice, as even experienced experts and professionals can't come to a consensus and give a clear answer to the question of which console is better PS4 or Xbox One? In any case, each product will find its consumers. However, as practice shows, the game console Sony at the moment in great demand.