How to make a Minecraft saddle

To quickly move through the worlds of Minecraft games, you can use pigs and horses. Tame them to be used as the vehicle. But riding need a saddle. How to make a saddle in Minecraft, want to know almost all the players. There is even an opinion that crafted this item is impossible. 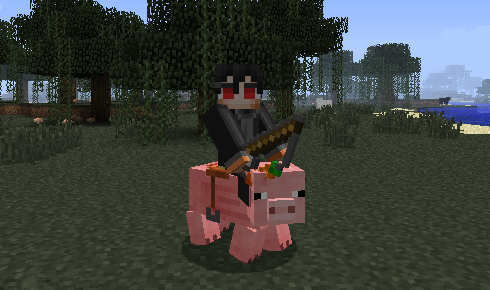 Why you need a saddle in Minecraft

The game can move quickly around the world, using a saddled pig. In the new version of Minecraft appeared horse on which to ride also only with the help of the saddle.

Horse riding will improve the level of achievement of the character.

With saddles pig can make the engine of the machine and to move around obstacles more quickly.

How to use saddle in minecraft the game

To ride a pig, you will need to make a trap and catch the animal. But to put a pig saddle, it is necessary to throw eggs or snowballs.

If to control the horse enough to keep the saddle in hand and press the PMK, for driving with a pig and need the fishing rod hung on the carrot.

The only problem in use of the saddle is to take it from pigs. As long as she lives, with this item she will not part. To return the saddle, you need to jump from a height so that the animal died and the player was still alive.

How to make a saddle in Minecraft

In the game there are three options for saddles. It can be found, bought or crafted.

To find the desired object, you need to find the treasure. For pigs is a fairly rare thing, but it is possible to find a saddle in one of the chests among other useful things.

If you have a presence in seven emeralds, you become the owner of what you bought the saddle from the butcher. To find this character in the village.

In General, to find a saddle in Minecraft is quite difficult, so in some cases it is better to do it myself. Many players believe that crafted the saddle , but the Saddle Resipe mod allows you to implement the plan.

To build in Minecraft saddle in the center need to position the floss in the bottom corners place the piece of iron, and the remaining cells to fill in five pieces of leather.

To make a saddle in-game is only possible with the new updates, so the other players have to go all on his heavy looking.