What time is the first morning service in the Church

For the Orthodox person it is wonderful to start the morning with prayer. It is especially useful to attend morning worship in the temple. In large cathedrals carried out as a rule at two services in the morning. 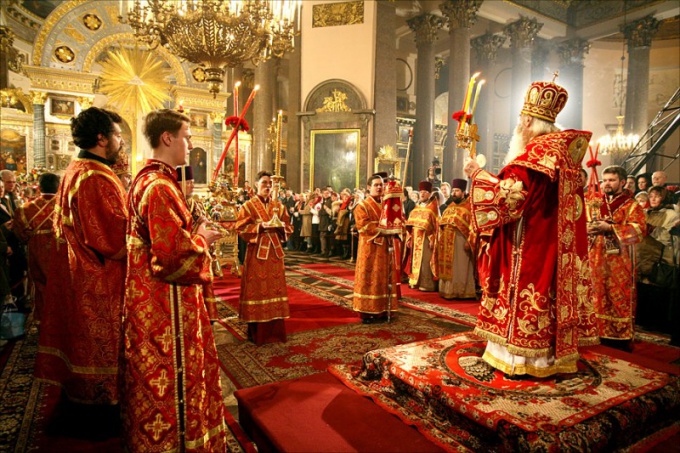 The tradition of early Christian worship

Morning from the first centuries of Christianity was considered a favorable time for prayer. Man, waking up after a night of rest, needs to turn to God with prayers before the start of the day. In the history of Christian worship Matins (morning prayer) could begin with the appearances first rays of the sun, then followed the Liturgy, which the faithful communed of the Holy mysteries of the body of Christ. On major holidays the service in the Church was held the night before the Grand event. The vigil lasted several hours, and dawn began the Liturgy. This practice is now very rare. Only at Christmas, Easter and Epiphany worship service begins at night. Weekday Vespers with the Matins is held in the evening, and the Liturgy begins the next day in the morning.

How many begin the morning of worship in modern temples

Depending on day of week, status of the temple and the total number serving in the clergy morning worship may begin at different times. In large cathedrals, where services are held daily, weekday Liturgy usually begins at 8 or 9 o'clock in the morning. There are liturgical periods when not allowed to celebrate the Eucharist (lent, except Wednesdays and Fridays, Holy week until Thursday). At this time in the temples is the worship of Matins, which may start at 7 am. In the monasteries practiced even earlier beginning in the service of God, as the duration of Matins or the Liturgy much longer.

In the Church's liturgical practice is attributed to make the Liturgy no later than 12 noon. In order to finish around this time the worship service begins at 8 or 9 o'clock in the morning. However, there are some indications that if the Liturgy is the evening, the Eucharist can be done later. It happens in the eves of the feasts of the Nativity and of the Epiphany. Ordinary time beginning of the morning service in the parish Church is nine hours after midnight.

I would like to mention that in large cathedrals and churches with multiple clergy on Sundays and feast days Liturgy Liturgy can be done twice in the morning. So, the first is called the Liturgy of the early starts around 6 or 7 am. During this time people can visit the temple before the beginning of the day (if it is a religious holiday, which fell on a weekday), confession and Eucharist. Then with a sense of spiritual joy of communion with God the believer can go to work.

The second morning Liturgy called later and its start usually at 9 am. A special place in the liturgical practice of the Church is a service, which was attended by the ruling Bishop. Liturgy in the Episcopal Ministry is a separate meeting of the Lord and the service itself. In such cases, the beginning of the divine service can be carried out at 9.30.
Is the advice useful?
See also
Присоединяйтесь к нам
New advices