Electric eel (Electrophorus electricus) is a ray-finned fish of the family Imnotobsessed. An amazing feature of this animal, in addition to snake-like body, the ability to generate electricity. 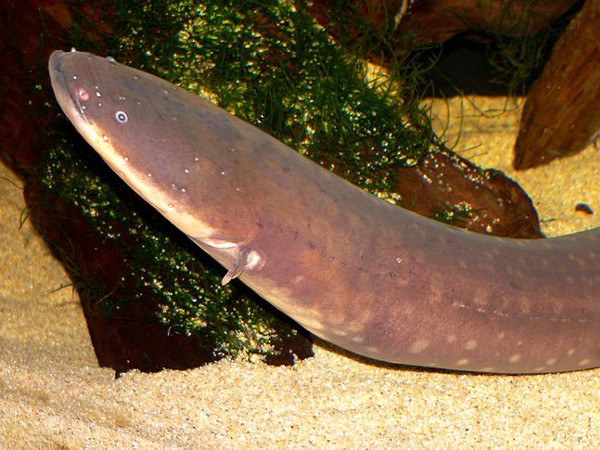 Related articles:
Electric eel is a large fish, long from 1 to 3 meters, the weight of the eel reaches 40 kg. Body elongated eel — snake-like, covered with grey-green skin without scales, and in front of it is rounded and closer to the tail flattened laterally. Eels live in South America, particularly in the Amazon basin.

Major acne generates a discharge voltage of 1200 V and a current of up to 1 A. Even a small aquarium species produce discharges ranging from 300 to 650 V. Thus, the electric eel may pose a serious danger to humans.

Electric eel accumulates considerable charge of electricity, the level of which is used for hunting and defense from predators. But acne is not the only fish that produces electricity.

In addition to electric eels, a huge number of freshwater and marine fish is able to generate electricity. There are about three hundred such species of various unrelated families.

Most electric fish use electric field for navigation or finding prey, but some representatives have more serious charges.

Electric rays are cartilaginous fishes, relatives of sharks, depending on the species can have a charge voltage of 50 to 200 V, current when it reaches 30 A. Such a charge can hit pretty large prey.

Electric catfish — a freshwater fish that reaches 1 meter in length, weight does not exceed 25 kg. Despite its relatively modest size, the electric catfish can produce 350-450 V, at a current of 0,1-0,5 A.

The mentioned fish are showing unusual powers due to a mutated muscles — electric authority. Different fish this education has different structure and size, and location, for example, the electric eel it is placed on both sides along the body and makes up about 25% of the weight of the fish.

Japanese aquarium Enoshima electric eel used to light Christmas trees. The tree is connected to the aquarium-dwelling fish it produces about 800 watts of electricity, which is enough for illumination.

Any electric organ is composed of electric plates — altered nerve and muscle cells membrane which creates a potential difference.

Electric plates, connected in series, assembled in columns, which are connected in parallel among themselves. The potential difference generated by the plates accumulates at the opposite ends of the electric organ. It only remains to activate it.

Electric eel, for example, bent, and positively charged between the front body part and a negatively charged back slips, a series of electrical discharges, striking the victim.
Is the advice useful?
See also
Присоединяйтесь к нам
New advices