Some cheese and fish to be used for making rolls

Many types of complex rolls consist of cream cheese and different types of fish. To get a real Japanese dish, it is important to choose the right kind of cheese to choose and buy the fish. 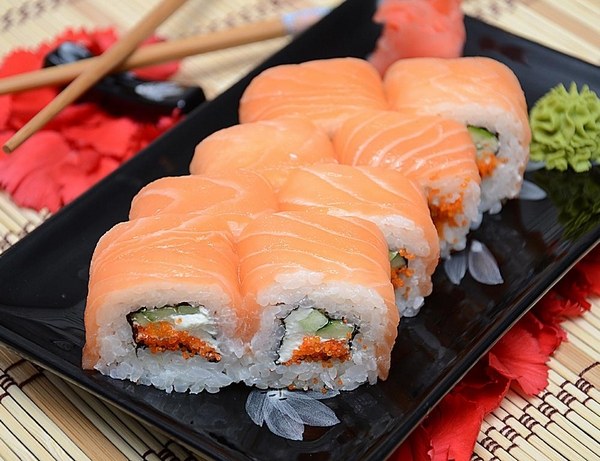 Related articles:
Rolls, the national dish of Japanese cuisine, has become so widespread in Russia that many of them cook at home yourself. If in Japan the most popular traditional rolls – thin, with one ingredient in the composition, is covered with a sheet of nori, we have successfully used invented in USA brand rolls, for example, Philadelphia or California. They consist of several ingredients – this can be fish, seafood, vegetables, mayonnaise, soft cheese. For example, Philadelphia includes cream cheese and a strip of salmon, optional added pieces of cucumber, avocado, eel, caviar. To prepare this delicacy at home is harder than traditional simple rolls, but it is possible, if you pick a good, fresh and quality ingredients.

What cheese to choose for cooking rolls?

Traditionally for the preparation of Philadelphia or other rolls with a similar recipe using cheese of the same name by the American company Kraft foods is a soft creamy mass, is made from milk and cream. But for sushi at home is not necessarily strictly follow the original recipe used real cheese "Philadelphia" are hard to find, as a rule, it is sold in major supermarkets and has a high price. But it is possible to replace it and take advantage of its counterparts – the creamy cheeses of other companies. A very similar composition and taste have the "beech", "Kind": "violet", "Arla", "Almette" (although the latter is good for rolls because of the high fat). They are cheaper and found in most stores. You can find other cheeses, as long as it was soft curd cheese without additives.

True gourmets say that nothing can replace the taste of "Philly" roll, and analogues of this cheese only spoil the product.

What fish to choose for making rolls?

Traditionally, the rolls are prepared from a sea or ocean fish, the river is rarely used. In Japan they eat raw fillet, very fresh fish without bones and skin, but in Russia such rolls cause suspicion, therefore, is used only salted, pickled or heat treated product. The most popular fish for sushi is salmon, coal, tuna, mackerel. The choice depends on the recipe, taste preferences and capabilities. Pickled or salted salmon to be sold everywhere, if you want you can find the eel to find in stores mackerel or tuna is more complicated.

You can combine multiple types of fish to one recipe of rolls: for example, a variation of the "Philadelphia" involves the use of strips of salmon on top, and inside is placed a piece of eel or tuna.

The most "Russified" recipes of rolls offered to put them in salted herring, canned fish – saury or sporty, but the taste will be significantly different from the usual Japanese dishes.
Is the advice useful?
Подписывайтесь на наш канал