The main characters of the fairy tale "Pinocchio"

Alexei Tolstoy created characters of his tale "the Golden key, or adventures of Pinocchio" in the image and likeness of the Italian story about a wooden man Pinocchio. However, the stories and the characters turned out completely different from the prototypes. Almost all the main characters of this children's book became a household image. 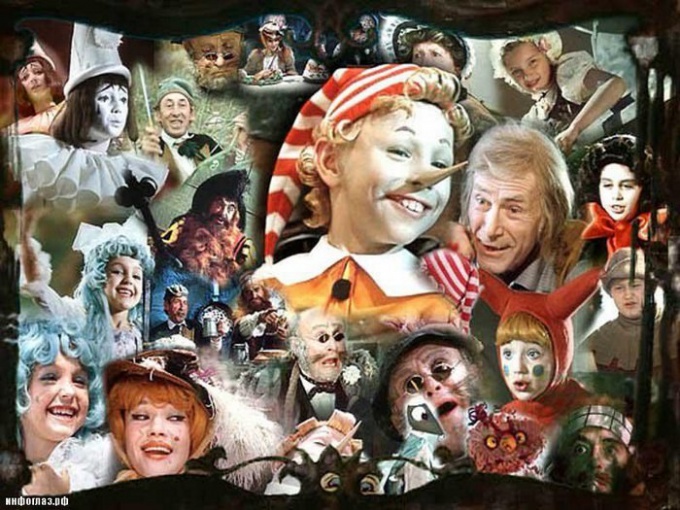 The first heroes of the tales, which meets reader – Papa Carlo and his friend Giuseppe, nicknamed blue Nose. Giuseppe – carpenter, cowardly old drunk who likes to fight. Papa Karlo – the organ grinder who lives in a small closet under the stairs. It is only painted on canvas hearth. However, the hurdy-gurdy had long been broken, and he is forced to beg.

Geppetto carves from a talking piece of wood the protagonist of the tale – a wooden doll with a long nose named Pinocchio. It is gullible, stupid fool. He is a very curious, kind, open, ready for adventure. Pinocchio tries everything to help, wants to find true friends, believes people. At the same time he's reckless and restless, abruptly stops all attempts of Malvina and of Pope Carlo to re-educate him.

Unlike Pinocchio, which never succumbed to the reformation, its prototype Pinocchio eventually turns into a well-behaved boy.

At the end of the tale the hero comes to his dream. In the puppet theater Carabas-Barabas, Pinocchio meets the puppet, who later becomes his faithful friends.

Malvina is a girl with blue hair and a porcelain head. It's a doll that escaped from the theater and lives in a small cabin in the woods. Beautiful, smart, well-educated, she's well-groomed, dressed. She loves to be the center of attention and to command others. Therefore, Pinocchio considers it a Biddy and a crybaby, naughty in the classroom and upsetting Malvina.

Piero melancholy, sad, unhappy poet with a white face and painted eyebrows. He wears a long sleeved shirt and white cap. Pierrot is in love with Malvina, considers himself her fiancé, and constantly suffers from his feelings.

Artemon — a black poodle, a loyal friend Malvina. He cares about the girl with blue hair, protects it and carries out all whims.

A turtle cake is a quiet, old, wise, lazy eye the inhabitant of the pond gives Pinocchio Golden key. However, she can't tell which door it unlocks, but I'm sure it's the door to happiness.

Karabas-Barabas — a huge man with a long black beard. He owns a puppet theater, calls himself the doctor of puppet science. Harsh, terrifying character, brutally treats its actors. He chases after Pinocchio, trying to take away his Golden key. But the wooden boy with a long nose is more cunning, and besides, he always help friends.

A prototype of the Karabas-Barabas puppet master Mangiafuoco from the tale of Pinocchio - only the occasional goodie.

Alice Fox — Fox has all of the qualities of Russian folklore. She is cunning, masterfully flatters, gets her by means of deception and false kindness. The swindler with a big road deception trying to take away from Pinocchio five gold coins.

Basilio's cat — a friend and helper of Fox. Pretending to be blind, and beggars and begging. He is stupid and comical. Alice Fox gets them and uses his cunning ways.
Is the advice useful?
See also
Подписывайтесь на наш канал