Where is mount Ararat

Mount Ararat is the sacred symbol of Armenia, which is currently located in neighbouring Turkey on the Armenian plateau. Ararat is also a popular tourist attraction and destination of the various research groups, because the study of the mountain can reveal the secrets of the formation of the whole mountain system of the near Eastern region. 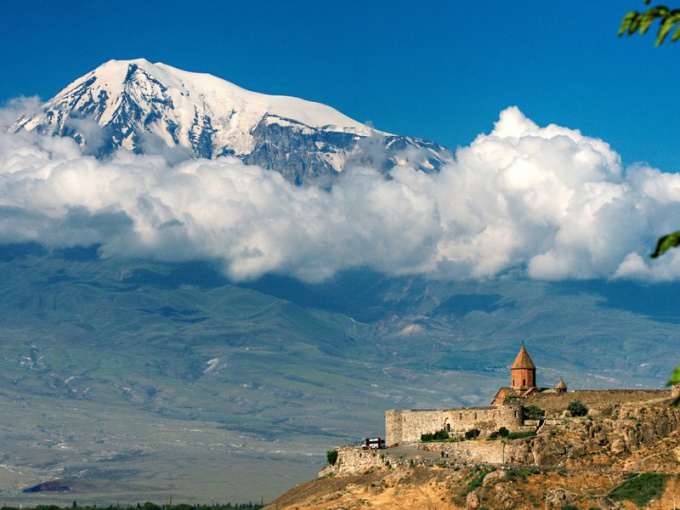 Related articles:
Mount Ararat is known worldwide as a sacred symbol of the ancient Armenian people, in Armenian families the boys very often are named in honor of the mysterious mountain. If you believe the legend, it landed on Ararat the ark with people and animals who managed to survive the deluge.

Mount Ararat is a volcano which may become active in the near future. But because of the peculiar volcanic structure of mount Ararat, the local people should not be afraid of the lava flows as the magma of these places is very tough.

This opinion is common largely because among the neighboring mountains and peaks of Ararat is the highest, and the path to the mythical homeland of Noah is a small distance. Really, throughout the middle East region and Asia Minor there are no such high mountains, so the assumption about the end point of the ark makes the most sense. By the way, the Armenians and some other Caucasian peoples consider themselves the direct descendants of the biblical Noah.

Where is mount Ararat and how to get there

Mount Ararat seen from Yerevan – the capital of Armenia. Standing on the observation deck of the city at sunset you can enjoy the unprecedented beauty of those places. The total distance to the Armenian border will be about 32 kilometers, and the path to the Iran-Turkish border and less, and is approximately 16 kilometers. Administratively the mountain Ararat is in the Turkish region of Igdir. 1828 and 1920, mount Ararat was in the Russian Empire and Armenia, but after the Turkish-Armenian war of 1920 and subsequent Kars peace Treaty of Ararat left for Turkey. Armenians have always lived in the area of mount Ararat, and all the Armenian highlands were part of great Armenia – developed ancient state, broken by the Seljuk Turks. After the genocide of the civilian Armenian population by the Turkish military in 1915, the indigenous Indo-European population here is almost gone, but until 1915 the Armenians constituted the absolute majority of local residents.

Where did the name mount Ararat

May sound strange, but the name of mount Ararat is not Armenian, is the name of the ancient state of Urartu. The name of the mountain was given by Russian and European travellers, and the Armenians and neighboring peoples began to use this name, because of the spread of the Russian language after the entry of these territories into the Russian Empire.

According to the beliefs of the people inhabiting the inhabiting the suburbs of mount Ararat, climbing the mountain is considered ungodly and very daring. Therefore, the majority of the climbers are foreigners.

Geographical science is not known how often the locals went up to Ararat, but the first recorded ascent to the mountain was made in 1829 by Johann Parrota, Alexei, Zdorovenko, Hovhannes Ayvazyan, Murad Poghosyan and Matthew Chelpanova. And for the first single the conquest of Ararat decided James Brims in 1876.
Is the advice useful?
Присоединяйтесь к нам
New advices