How to sew a dress in the style of 60-Kh

Fashion 60-ies of the last century is sometimes called careless. Such a definition have their own reasons. New fabrics, bright colors, simple geometric cut, short skirts, will not restrict movement – people seemed to remember that there is joy and fun. In recent years, the style of the 60's have come back into fashion. To sew this dress, you can with your hands, including modern fabrics. 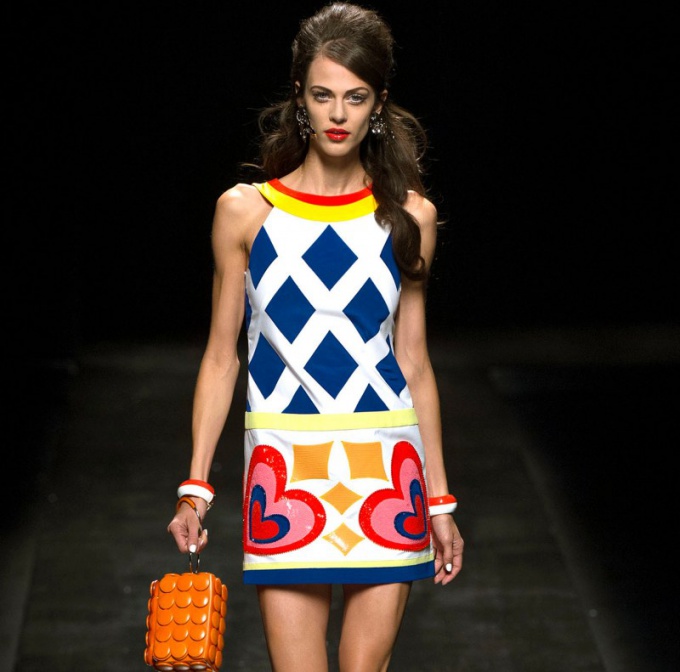 In the 60-ies of the traditional fabrics like cotton, wool, satin, staples was very important. At the same time gained much popularity artificial materials, like Bologna, crimplene or Soviet "cosmos", which had a very original texture. Artificial fabric of those years were beautiful but not very hygienic. So dress in style of the 60's better to sew any of the traditional natural materials, or modern synthetic or blended. In the latter case, it is very easy to do the calculation, as the cuts become wider than they were half a century ago. The styles of the time quite simple – dominated by geometric fit. In addition, in the 60s the fashion was short skirts. If you decide to sew a costume in the style of the 60's, keep in mind that was popular long fitted jackets.

The colors can be any but women of those years prefer bright saturated colors.

A dress pattern in the style of the 60s is hard to do. Even the photo from the shows of that era shows that the most commonly used underlying pattern, which can be a little to simulate. Remove the extra few yardsticks. You need:
- total length of the product;
- the length of the top to the ruffles;
- length ruffles;
- sleeve length.

Outline details of the main pattern on the graph paper. Put on the shelf and the back length to the ruffles. Using marker draw lines parallel to the bottom line. Darts at the waist line not tracing, the dress will be straight. The frill itself can be cut directly on the fabric. It's just a strip width of from 10 to 25 cm In the latter case, the frill is in fact a skirt is too low. It is better to cut on the bias. Its length equal to the length of the hem, multiplied by 1.5 if the ruffle is pleated, 2 times if you expect to build, and 2.5 - 3 times for pleating, who was also in those years, in a very large fashion. The sleeve can be done straight, although in the 60s wore on and "flashlight" and "wing", and other styles.

Pleating is better to do on fabric that holds its shape well.

Dress is with short zipper in the back, so the fabric fold on equity and align the middle of the front fold. Details of the back position in free space. All of the patterns circle, not forgetting the allowance of 0.5-1 cm at the seams and 2-3 cm for the handle the bottom. Frill cut it out with the help of tailor – meter wooden or metal ruler, used by the sellers in the shops of fabrics and great tailoring gon. Of course, the new cotton or linen must be pre-processed, that is, to wash or to proektirovanii, otherwise he can sit down after the first washing.

Allowances can be treated with a serger as soon as you break parts, but you can do it in the end.
Is the advice useful?
See also
Присоединяйтесь к нам
New advices