Herbs and spices - what and where to use

It has long been in food added herbs and spices that initially even replaced the salt. When cooking food, and now use spicy greens, roots, fruits and flowers plants as aromatic seasonings that adds flavor to any dish. 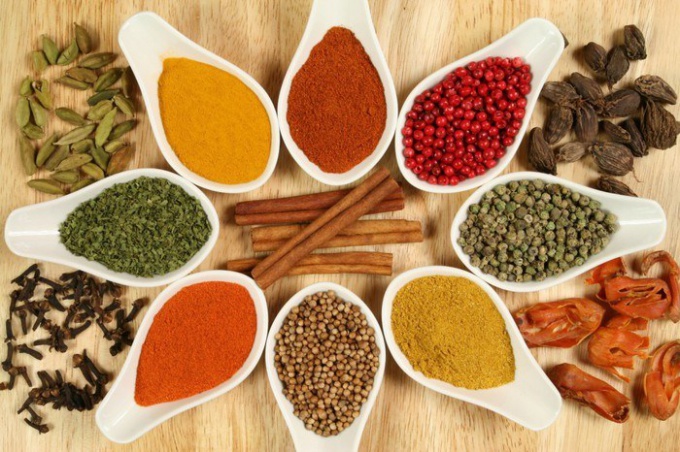 The penetration into Europe of spices from Asia, America and the tropical Islands was associated with geographic discoveries. Gradually, Europe began to import fruits and herbs of the overseas plants, which were very expensive. But the desire to give new taste of food prevailed over the high cost of unfamiliar plants, which have increasingly entered the everyday life of the citizens of France, Spain, Italy and other countries. People have learned to put food in those spices that are more suited to meat, fish, poultry, vegetable dishes, various soups and dough products.

The spices gave a pleasant and distinctive taste and aroma of food, improved taste qualities of familiar products. People drew attention to the medicinal action of plants, which was especially noticeable when added to tea, coffee and other beverages.

Spices are toned, to remove fatigue or, conversely, soothed and normalized sleep and the nervous system.

Now, in large and specialized stores you can buy almost everything that grows on different continents. In order to apply for the many species that are sold in stores, you have to know where to put it. Buyers make it easier specially compiled sets of spices for meat, fish, chicken, mulled wine, etc.

Cooks in restaurants and women at home meals are prepared using local and imported herbs and spices. For many centuries have accumulated enough information about what spices with which foods are best combined.

Taste and useful properties of herbs and spices and their use

Peoples from different countries eat mostly those foods that for centuries have nourished their ancestors. This refers to animal and vegetable food. A lot depends on the lifestyle of the people. Plants that grow on the territory of different countries, eaten, prepared from them drugs, medicines, spices, extracts.

Rich in spices, the food of the peoples of the Caucasus, India, Iran, China and other Asian countries. In the North and in the South of Europe put in a dish of herbs that grow in mountainous areas and in the lowlands, but also habitually used and imported spices.

Pies with apples that are so prevalent in Europe and America, always sprinkled with cinnamon, brought from Asia. Cinnamon make the filling rolls, seasoned dishes of fish and meat in the Caucasus, and added to coffee and tea for flavor.

The same can be said about the saffron and turmeric, which is so rich common worldwide Asian cuisine. Not only because in America and England, for example, there are many immigrants from India. Looks nice pilaf when it is poured saffron infusion in water, its taste is fragrant. Curry interrupts specific, not always pleasant chicken flavor.

In Asian dishes are also often put ginger. It is good to add to meat dishes, especially well suited to the ginger pork combined with lemon and garlic and Basil. Ginger has a truly miraculous properties, it is better to eat dry powder, and fresh. Pickled ginger is always served with sushi, placed in fish dishes.

Uzbek pilaf is not so good, if it does not put cumin. Cumin is used in many lamb dishes. Lamb also cooked with rosemary, in addition to the traditional onions, garlic, pepper, coriander, paprika, Bay leaf and other spices.

Meat, especially minced meat, pate, improves the taste of nutmeg. In carvery Lunches also put thyme, Basil, sage, mint. Beef is cooked faster and will be soft, if it is spread with mustard and leave for a while in the fridge.

Much still depends on the technology of making dishes. Its taste and aroma depends on many things: fast, or slow fire it is cooked, at what time in a dish put the spices, mushrooms and vegetables. The taste may be better or worse or just different.

Many dishes, put the garlic. From when and how to put it, too, will deteriorate or improve the taste of food. For example, in Uzbek pilaf garlic put whole head in the skin, and then pull out. In many Asian dishes garlic fried quickly over high heat, then added to it the vegetables, and all this is done for 2-3 minutes. Simmer longer if all of the components, the taste will be quite different.
Is the advice useful?
Подписывайтесь на наш канал