How to make a current regulator

An important element in the design of any welding device is adjusting the operating current. Industrial apparatus exercise is bypass using inductors of various types, the change of the magnetic flux or magnetic bypass grafting, the use of active ballast rheostats and resistances and rheostats. The disadvantages of such regulations are obvious: the complexity of the design, the massiveness of the resistance, their great heat, the inconvenience of switching. 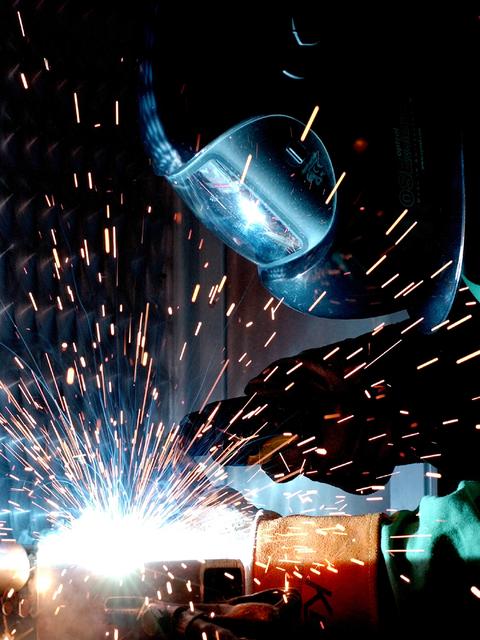 Related articles:
You will need
Instruction
1
Make the secondary winding when winding of the welding transformer. Change the current switching the number of turns. This is the best option. But to apply this method it is only possible to adjust the current, to adjust it within a wide range it is not applied. It is worth saying that this method is associated with certain problems. First of all, through the control device undergoes a significant current, which leads to its complexity, and for the secondary circuit, it is impossible to choose a powerful standard switches that can withstand current up to 200 A. Quite the other thing - the circuit of the primary winding, because the currents here 5 times weaker.
2
Collect the thyristor regulator. Circuitry available, it is simple to operate, needs no adjustment and is well established in the process. The power is adjusted periodic off for a predetermined period of time of the I-th winding of the welding transformer at each half-cycle of current. The average value of the current decreases. 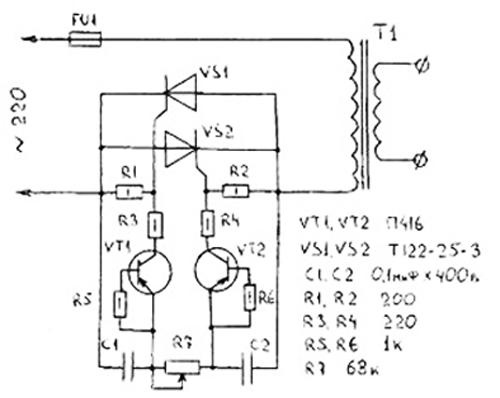 3
Turn on the main elements of the controller (thyristors) in parallel and counter to each other. They will be alternately opened by current pulses, which are formed by transistors VT1, VT2. When power is supplied to the controller both thyristors are closed, through variable resistor R7 begins to charge the capacitors C1 and C2. Upon reaching one of them voltage avalanche breakdown of the transistor, the latter will open the way current discharge connected to a condenser. Then open the corresponding thyristor, connecting a load to the network. At the beginning of the next half cycle, everything is repeated, but in reverse, in reverse polarity.
4
Adjustment of the time of thyristors produce a change in the resistance of the variable resistor R7 from the beginning to the end of the half cycle. This leads to a change in the total current in the I-th winding of the welding transformer. To decrease or increase the adjustment range, change the resistance of the variable resistor R7 in the smaller or bigger side, respectively.
5
Replace the resistors R5, R6, which are included in the base circuit and transistors VT1, VT2, working in avalanche mode, discs. Connect the anodes of the discs with extreme conclusions of the resistor R7, and the cathodes connect to the resistors R3 and R4. For the current regulator assembled on the discs use devices like КН102А. Use as VT1, VT2 transistors type П416, ГТ308, but can replace them with modern high-frequency low-power with similar parameters. Use a variable resistor type SP-2, a different type of MLT. Type capacitors MBM office or an operating voltage of 400 V. the Regulator requires no adjustment, make sure only the stable operation of transistors in avalanche mode.
Note
All the elements, including heat sinks of the thyristors, and insulate from the enclosure, because the device has a connection to the network.
Is the advice useful?
See also
Присоединяйтесь к нам
New advices