How to fill out form cod

If you need to send a parcel or parcel post shipping costs - make it pretty simple. Enough to come to the nearest post office, pack the parcel, fill the form imposed payment and to pay for shipping. 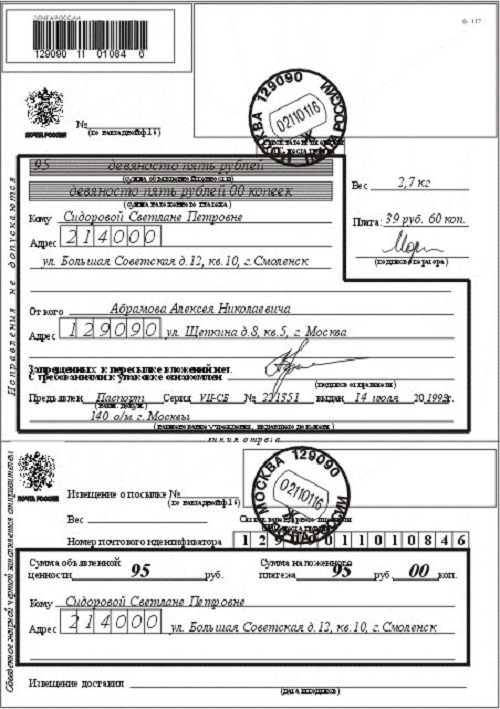 Related articles:
You will need
Instruction
1
Take in the appropriate window (sending and issuing of postal items) the employee of the Department mail the form imposed payment. In the first row (arrow 1) in capital letters enter the amount of the declared value. The second line (arrow 2) is also in capital letters - the amount of the imposed payment. In the "to" field (arrow 3)enter last name, first name and patronymic, without reductions, in the genitive case) of the person whom you are sending the parcel. The index and full address (arrows 4 and 5), including Republic, district, city, street, rooms: houses, housing and apartments. For example: the Republic of Komi, Priluzsky district, village of obyachevo, Svobody str., 45. Depending on place of residence, in some cases, it is sufficient to specify only the city, street, house number, room building, apartment, and when sent to a small village - the village name, surname, name and patronymic of the addressee.
2
After filling in data about the recipient, go to the specify of your data. In the string "From" (arrow 6) write your surname, name and patronymic name also in the genitive case. In the next line (arrow 7) specify the index and the address exactly as that appears on your passport on the page "residence permit". The line below the signature, thereby confirming that in the package there is nothing prohibited and that you are familiar with the packing requirements.
3
At the bottom of the formand located in the frame, specify the amount of the declared value and the amount of " cash payment figures, both amounts must be the same. Then re-enter the data "Who": a surname, a name, a patronymic, without reductions, and in the genitive case, the full address and postcode. All other blank fields are filled by an employee of the post office. After receipt of notice on receipt of his name on the parcel, the addressee will have to pay the amount specified in the forme (the amount of " cash payment), in order to get him out of the package.
Useful advice
for sending parcels or packages cod you will also need your passport to confirm your identity and accuracy of the data.
Is the advice useful?
See also
Подписывайтесь на наш канал