How to get rid of condensation on the ceiling

Condensation on the ceiling is most often formed in areas with high humidity, and where insufficient ventilation and air conditioning. A large build-up of condensation is typical for basements and cellars. 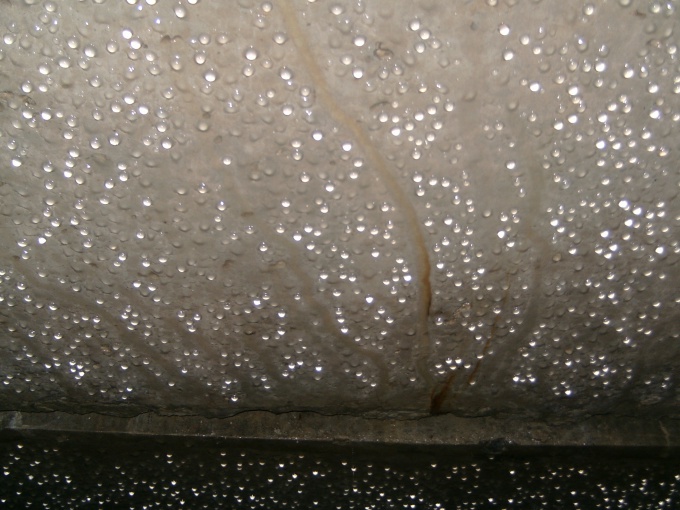 Related articles:
You will need
Instruction
1
Check the operation of the ventilation system. Normal air is one to two cellar volume per hour. If the basement air is not stagnant, there is no characteristic smell of damp and mould, ventilation channels are working fine.
2
Check the insulating layer of the ceiling for damage. If the ventilation system is working properly, but on surfaces as condensation water, so the room is rather cold. Take measures to restore damaged insulation.
3
Use as heat insulating materials, those building materials, which are characterized by the ability to absorb the maximum amount of excess moisture and fast to dry. To insulate the ceiling, expanded clay, pre-sifted brick fight, or forest moss – all of these materials are inherent to the described qualities. If the room is too cold, it is desirable to equip the thermal insulation on the surfaces of the walls.
4
Equip the system for draining the condensate from the premises. To do this, arrange the groove of the plastic tubes, which accumulated on the ceiling the moisture will drain to a rainwater pit. On top of the plastic chute facing the street, set special umbrella made of galvanized iron or close the inlet of the plastic film. For the device the chute can be used sewer plastic pipe and components.
5
Clear the area for gas content, as the concentration of carbon dioxide in excess of 10 percent is considered dangerous for the human body. To do this, light an ordinary match. If it does not light up, it is a sign of accumulation of carbon dioxide. Thoroughly ventilate the room.
Note
Annually conduct fumigation in the cellar. To do this, use the whitewash with the addition of copper sulfate. Use the solution immediately after preparation, because its efficiency is significantly higher.
Useful advice
The ventilation system of basements and cellars includes two channel – inlets and exhaust. If ventilation is limited to just one channel, for normal functioning it needs to be equipped with metrolinien.
Is the advice useful?
See also
Подписывайтесь на наш канал