If you find yourself under the door pin, egg, black feathers, land or any other suspicious things against you sent to someone's magical manipulation. Superstitious people such "surprises" are called lining. 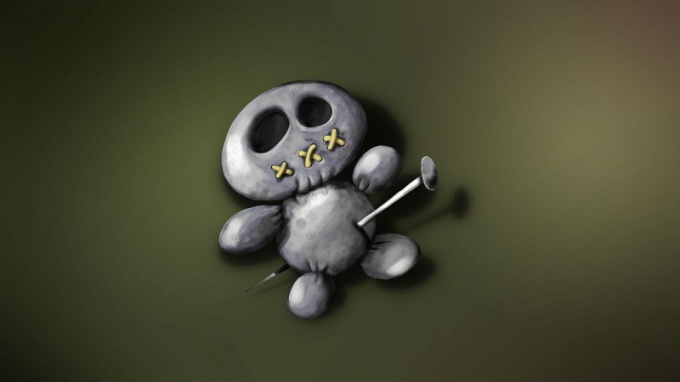 The lining may be located not only near the front door. They can be any of the things, suddenly found on the street or in the apartment. Very often, to put a curse likewise use metal things: pins, needles, nails, pins, etc. Sometimes charmed needles quietly plugging in the door openings, and pins in clothes. Nails hammered into the door or throw. Sometimes metal objects wrapped thread, making a hex on them. Such pads have not considered esoteric even the most terrible, as their impact is not too strong.

Second place by frequency of use is salt and earth. Salt is a powerful accumulator of energy, it spiked to cause discord in the family and illness. The earth taken from the cemetery and placed with the wish of death to the recipient of the surprise. In some cases, salt and ground can detect not only the threshold but also in the apartment, for example, under the Mat. Sometimes they even rubbed into the cracks and doorways.

On the third place by frequency of use are feathers, dead flies and other insects. The feathers are laid to cause poor sleep the victim, lice – disease. The apartment normally, all this is not recorded, but left on the doorstep, with the expectation that the victim will step on the lining.

The most terrible of all things mystical, superstitious people considered the egg. There is a perception that anyone who touches him will die soon - no later than 4 days.

There are options, not aimed at a specific victim. They may be money or other items left on the street. Thus, disease of the witches transferred to other people. Those who believe in superstition, afraid to raise orphan bills, so as not to take hex's disease.

At crossroads, you sometimes also leave a variety of things: coins, thread, shoes, a handful of stones, etc. Through them it is enough just to step over to the witchcraft worked.

How to protect yourself from the negative effects of underlayers? The most obvious way – disbelief in magic and all that goes with it. However, if this belief is present, you need to be careful not to touch suspicious things with his bare hands, not to step through them. If you find something in my apartment or under the door, put on gloves, grab a broom and dustpan, sweep up the lining, take him away from the house and burn it. It is advisable to burn everything that was in contact with the magical object, such as a broom and dustpan. You can read the prayer.