March
Sometimes doing razgriz on the buckwheat, add a little soy sauce, I like it. But it is one constantly quickly bored, so I decided to alternate the buckwheat with yogurt, you get a kind of roller coaster. 1 day - buckwheat - 80-100 Kcal per day, 2 day yogurt (I drink a 930 ml of 1%-2,5% fat, otherwise you can fall in obmarok) - 500 Calories a day. Switcheroo is not braked, the weight flies well. Just bored and is thinking to try to add in these slides Apple or chocolate days. 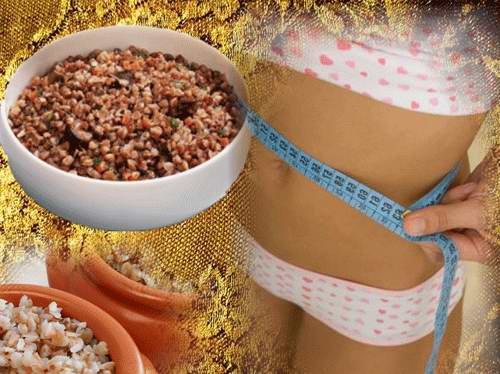 The original weight I was big enough 89kg with the growth of 165 cm, almost three months, I ate steamed buckwheat, every day, for the first time without adding anything, then began to include in the diet 1-2 vegetable (tomato, cucumber, pepper) or fruit (apples mostly, sometimes oranges), sometimes all day eat buckwheat pouring milk or yogurt. very effective but hard. after a week, I stopped tasting it, and I was already sick from the smell, but the results were and I didn't want to give up. For a year the weight rests is the truth floating a couple kg, but it does not matter

I tried buckwheat diet. It has a few different menus and different duration, but there is one important rule - buckwheat do not need to boil, to pour it with boiling water, close, something like towels or pillow and leave for a few hours. Then porridge is ready, but it is impossible to add neither salt nor sugar. The only thing possible in this case to combine the buckwheat so it's 1% kefir. I like this diet very much, because I can't eat fresh food, and to me personally it is important diversity, which is not observed.

Tried buckwheat diet a year ago. I must say, the efficiency in the neighborhood of five points. The first two days were without much effort, but then it started... I felt fatigue, lack of sleep, although sleep as usual. Apparently, the impact of lack of vitamins and nutrients. A week later, the state has leveled off, the diet no longer seemed so terrible. In the end, for 2 weeks I lost 3 kg.

I survived 7 days. I like the musical grease but when you eat it without salt and sugar, then get tired on the second day. Yes, and don't eat much. So, I went to a small passage off the diet and ate cereal with a small amount of soy sauce. The only sauce should be natural and not fake. And green tea can be replaced by herbal (green lowers blood pressure, and I have it so low). Brewed the leaves of blueberries and black currant, mint, lemon balm. In water added a little lemon juice.

A good diet, but hard enough. The first two days there I want badly. Three methods of buckwheat is not enough. I and all the mess was divided into 5-6 receptions. Have had a little less, but hunger is not so much tortured. And plenty of water. As soon as I felt hungry, just a glass of water. The first day I was a little queasy in the evening, so that night I drank a glass of water with a spoon of honey and lemon juice. Passed only 5 days, but the result is – minus 5 kg!

Very much recovered after childbirth, nearly 30kg. As soon as I stopped breastfeeding, thinking about the restoration of the figure. The best option seemed to me to be buckwheat diet reviews friends were only positive. For six months I have regained my former weight, leaving only a little skin tightening. Buckwheat diet satisfied, I advise everyone, you only need to have willpower.

Why you need a diet?

More often meet recommendations for diet. But I can not catch the essence of it. Buckwheat porridge, boiled or raw (steamed, soaked grain) is rather ordinary from a number of cereals. Its main feature is the wealth of b vitamins, as a consequence beautiful nails and skin. A mono diet is, in principle, makes the body to suffer, so why torture him? Often misled about the features Greci argue that it is also indicated for diabetics. Once they are so treated, then the rest will fit. So – this is a myth! In table No. 9 buckwheat is no longer included, as it is proved that the carb in it as high as in other cereals. It is the carbohydrate energy source. And the excess goes into fat.

Buckwheat like a child, throughout the year arrange once a week fasting day, all day, only eat porridge all the time! Consistently the next day pleased with the scales dropped grams. And the buckwheat is very useful and cleans well bowel! Buckwheat I add nothing because I am not bored. Is very easy! These days I drink only plain water but also herbal teas, I love peppermint and Linden, I recommend - very tasty and healthy!

10 days of "sitting" on the buckwheat, I lost 7kg. the Most important thing is to catch a wave that would not suffer from monotony of diet and to avoid thinking about failing at something sweet, to be honest on the 4th day she was terribly bored. Buckwheat cook in the evening 200g raw cereals, fall asleep in a saucepan and pour hot water over, cover with a lid, in the morning will almost polozena mess, sorry salt cannot, as you know salt retains water in the body, but add a little soy sauce or in prikusku with 1% yogurt, very tolerable. They say that people with 3 blood group, buckwheat does not help