How many grams of gold in Olympic medals

Ended on London jubilee, the summer Olympics the best athletes on the planet 302 times awarded the medals. However, although the medals for the first place and are called gold, in fact this precious metal in them not so much. But the value of these sports trophies, of course, is not measured by the value of the metal from which they are made. 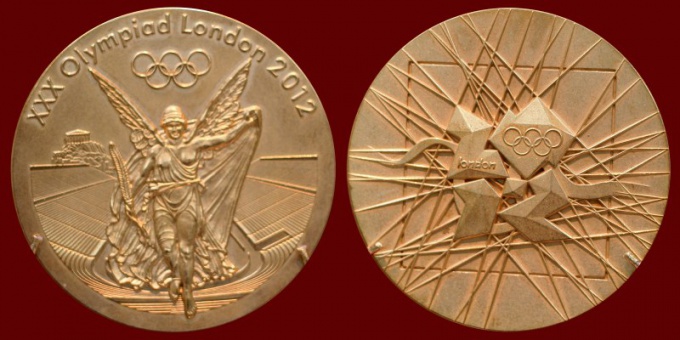 Medals of the London Olympics are 85mm in diameter and 7mm thick, and the weight of the awards varies from 375 to 400 grams. Medals for first and second places by 92.5% consists of silver. Medals for second place up to the required weight Supplement with copper, but the highest awards to copper added to the gold - plating of this metal is 1.34% of the total weight or about 6 g. Awards in bronze 97% copper, 2.5% zinc and 0.5% tin. Interestingly, the metals used for the production of the medals was mined near salt lake city and in the Mongolian mine Oyu Tolgoi, zinc was brought from Australia, and tin from the British County of Cornwall.

In the history of the modern Olympic games was of pure gold only once - at the IV sports forum, who in 1908 also took place in London. Then the medal had a diameter of 3.3 cm, but it was a full 25 grams of precious metal. The British were not obliged to do - at the First Olympic Congress held in 1894 in Paris, was adopted by the Olympic Charter, which established and common standards for awards to the athletes. It said that the medals for the first place should be made of silver of 925-th sample and covered with 6 grams of gold. However, these rules are rarely adhered to - for example, at the II Olympic games held where the Charter was adopted, the winners were awarded bronze rectangular awards with a silver coating. At all passing after the Second world war games accepted standard observed more precisely the content of gold in the medals ranges from 6 to 6.5 grams.

If you measure the price of the coin its constituent metals, the gold medal of London 2012 should be estimated at $644, the silver - $330, and bronze - $5. However, the known precedent, when the Polish athlete was put up for auction in Athens received a medal and received almost $82 500.