Ski jumping is equipped with ramps program included in the Nordic combined, as well as acting as an independent sport. The birthplace of ski jumping is considered to be Norway, where in 1840 held a similar competition. 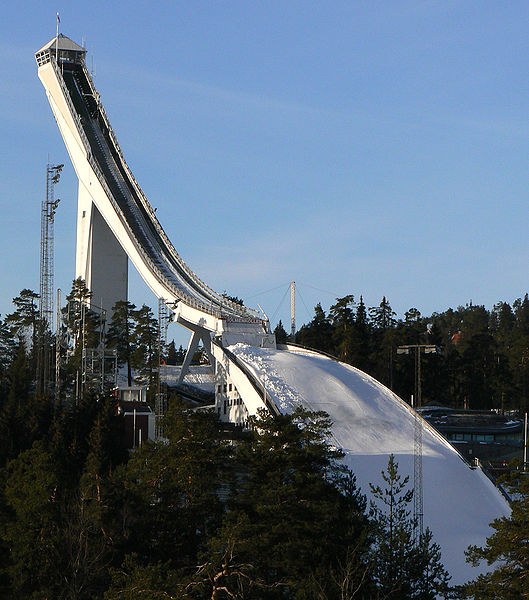 First, the skiers jumped from the natural terraces on the mountain slopes, and later with a specially constructed structures. Length of flight was not measured, there was the height of the jump. The official registration of the range began in 1868. Since 1945, the jumps began to assess also the correct execution of the flight, the dynamic balance control of the body during flights, according to the technique of landing and entertainment.

In the program of the first Winter Olympics in 1924 included the jumping height of 70 meters, and in 1964 the skiers jumped from 70 and 90-meter springboard. Since 1992, personal presentations are made on trampolines with a height of 90 and 120 meters, the command — only on 120-meter.

Jumping graded by five judges on a 20-point system. The best and worst rating, cast, count three medium. Particular attention is drawn to the technique of landing, for the fall, or touch with hands of the earth, each judge takes off 10 points. In official competitions for ski jumping can only be men.

The technique of jumping has changed over time. Norwegian jumpers practiced parachuters manner of the jump, which until 1954 was almost the winners at the world Championships and the Olympic winter games.

Then the championship took the Finns switched to the so-called aerodynamic style. Skiers began during a jump, press firmly the hands to the body and lie almost parallel to the skis. Besides, the Finnish jumpers have the sense to loosen the spring that pulls the boots to the ski, thus increased lifting force. Since 1964, the medals began to receive not only the Finns and Norwegians, but also the athletes from the GDR, FRG, USSR, Austria, Poland, Sweden.

In 1989, a revolution in the technique of ski jumping was made by the sportsman from Sweden, Jan Barlev. He threw socks ski after repulsion and significantly increased range of flights. At first, judges did not favor new style and put Baklava low marks for technique. But range of jumping he simply was not equal, and further the V-shaped technique moved the whole world.

New style jump created a new profile kickers, which became more elongated. Athletes, breaking away from them, catching the air currents and soar like gliders. It is possible to increase safety.