When the world will end

The thought of the impending end of the world dominates the minds of many people for thousands of years. Talked about and wrote long before the advent of Christianity and Revelation. In recent years, the question "When will the world End?" is occurring ever more frequently. And the people all intently studying an ancient prophecy and looking up at the starry sky. 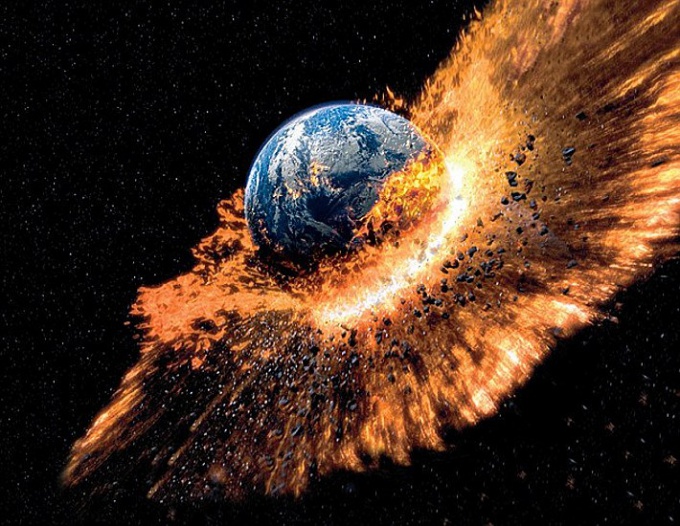 Humanity has already survived the terrible disaster that destroyed almost the entire population of Earth. Until modern times came the scattered legends and stories about how civilization reached a fairly high stage of development, suddenly died in the terrible cataclysm. The most famous and popular among various peoples the myth – the myth of the Flood. In some legends of a Flood – a huge wave that spilled over the highest mountains, in others – gradually arriving water, which had flooded a vast area. In all the tales of survival of the one pious family that warned the gods. For everyone else the Deluge was the end of the world.

Eschatology paints a terrible picture of the beginning of the end: giant tsunamis, earthquakes, hurricanes, volcanic eruptions, and for those who survive a long winter, famine and epidemics. Believers of any denomination perceive the Apocalypse as inevitable, but necessary procedure before moving on to a better world. There are people who are waiting for Armageddon with interest, as the large-scale spectacle and expect to be seated in the first row, and the alarmists in horror looking for the next predicted date.

For the last 2,000 years of the alleged end of the world was a huge number, and since the late nineteenth century of the prophecy came crashing down on the heads of people a continuous stream: 1874, 1900, 1914, 1918, 1925, etc., and in 1999 parts of the world expected 13 pieces. XXI century the number of Apocalypses is not far behind from the previous century. For the first decade accounted for about 30 Armageddon.

The nearest end of the world was expected to take place in December 2012. This is the most common end of the world in the history of eschatology. In the winter solstice (21.12.2012) ends another cycle of the Mayan calendar that began in 3114 BC and lasted 5125 years. According to the beliefs of the ancient Mayans, this day will be the end of the Fifth Sun". It will be marked by global cataclysms, which will erase from the face of the Earth all of humanity.

In 2018 should come the Apocalypse due to nuclear war (prophecies of Nostradamus). 2036 collision with Earth, Apophis, asteroid, whose diameter is about 300 meters. 2060 – calculation of Isaac Newton book of Daniel. 2892 year – the prophecy monk Abel.

Other parts of the world have more or less exact dates. In the next 50 years is expected a revival of the volcano. The eruption of smoke and ash for several years to hide the Earth from sunlight, leading to the death of all flora and fauna.

In the same period, it may be a sharp change of the magnetic and possibly the geographic poles, which resulted in the planet at some time will lose their magnetic field. Inversion is dangerous because in the absence of a field, cosmic rays can reach the Earth's surface and kill all life on the planet.

Another prediction associated with global climate change: warming or cooling. In the case of warming can completely melt glaciers and the polar caps, and most of the land will be flooded. In the event of a cold snap will come a new ice age, will disappear many species, and humanity, if it survives under such conditions, the development will be driven back to the stone age.

In about 5 billion years the Sun will become a red giant, will increase in size several times and will absorb the first 3-4 planets. Thus, according to scientists, the Apocalypse is inevitable, we can only hope that it will happen in the very distant future.