How to change thermal paste

Good thermal conductivity between the heat sink and microprocessor depends on the state of thermal paste. After drying it loses its valuable physical properties, and good cooling of the microprocessor is lost. 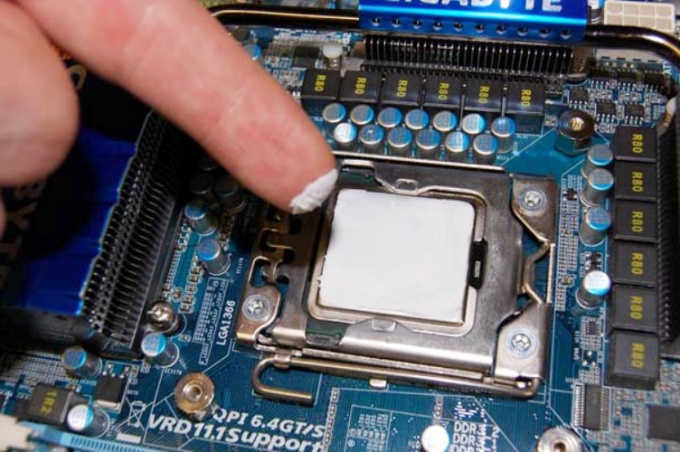 Related articles:
Instruction
1
To replace pasta for a start, carefully remove all fasteners and detach the CPU heatsink together with the fan. Remove the CPU by turning and lifting up the fasteners. Then clean CPU and heatsink of the remnants of the old thermal paste. Now take a flat head screwdriver, evenly spread the thermal grease on the processor chip. The layer thickness should not exceed 0.3 mm. Now install the CPU, heatsink and fan in its place and test the functionality of the computer.
2
As for the laptop, everything is a bit more complicated. The main thing – to open the cover to get access to all the internal components of your laptop. The remaining steps are similar to the operations described above. Better tell you how to change the thermal paste on the graphics card.
3
So, turn off the laptop, disconnect from the network and place it on a flat surface, then remove the battery (necessarily). To remove the cover, Unscrew all the bolts that are not immersed in the case. Now you have access to the "guts" of your laptop.
4
The video card is pressed against the radiator using the four bolts. Unscrew them with your finger pry the opposite edge of the card and pull up and then pull out from the connector. Now need to remove the remnants of the old thermal paste from the chip and heatsink. First, the paste is removed from the radiator.
5
When you are finished to remove the thermal paste, wipe the surface of the chip to a mirror Shine. Now you can start to apply new thermal paste. It can be applied to a finger (just need to wash my hands), and some kind of appropriate subject. Rubbing the paste evenly over the surface, make sure the layer of paste was smooth and thin. In addition to the chip thermal grease anywhere anymore cause don't need.
6
Now insert back into the connector my video card. Press it and hold with your finger, then tighten the bolts in place. Tighten the bolts, put on the lid and lock it.
Is the advice useful?
See also
Присоединяйтесь к нам
New advices