How to cook soup kharcho

Soup kharcho – a Georgian dish. To prepare this soup use beef brisket, as translated from the Georgian "kharcho"is a beef soup. But some Housewives brewed a broth of lamb or breast of chicken. 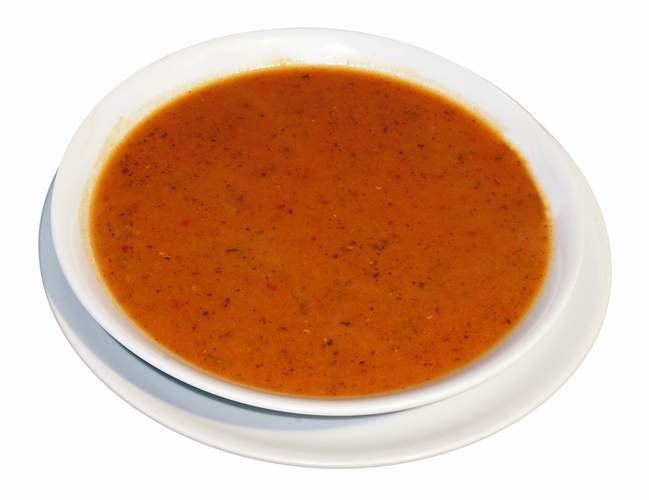 Related articles:
You will need
Instruction
1
Rinse the beef brisket under cold running water. Cut into pieces. Cover with cold water and place on high heat. When the meat has boiled, remove the foam and reduce heat. Cook meat until tender, about two hours.
2
Finely chop the onion and sauté in heated pan until Golden brown. Nuts grind in a mortar or in a blender. Rinse the rice.The brisket is ready, remove from broth, separate the meat from the bones. Meat cut into large pieces.
3
Fold in broth fried onions, chopped nuts, chopped meat, stir in the rice. Add sour plum, pitted or sauce "Tkemali". Simmer for 20 minutes.
4
Tomatoes scald with boiling water and peel. Cut into slices and lightly fry in vegetable oil or fat, removed from the broth. Put the tomatoes in the soup 10 minutes before the end of cooking
5
Add to soup hops suneli five minutes until tender.
In the finished soup add the garlic, passed through the press, close the soup with a lid and let it stand.
In a bowl of soup and sprinkle with fresh parsley or cilantro.
6
Prepare kharcho chicken.
Greasy chicken chop into pieces and simmer 45 minutes. Remove the chicken from the broth and place in saucepan. Add the chopped onion, a little broth and simmer for 15 minutes. While stirring pour one table spoon of flour and simmer another 10 minutes.
7
Boil the tomatoes and sour plums in water. RUB them through a sieve. Crush walnuts in a mortar. Fold in broth mashed plums and tomatoes, braised chicken, nuts, garlic. Add Khmeli-suneli and cook for 10 minutes. Ready soup sprinkle with herbs.
Useful advice
Instead of sauce "Tkemali" soup can acidify pomegranate juice.
Is the advice useful?
Присоединяйтесь к нам
New advices