How to learn to dance breakdance

Dance Break Dance is divided not only on the upper and lower break, but the many sub-genres. And the most interesting, beautiful and dynamic looks like such a dance where there is mixed movement and elements of all sub-genres. B-boys (break dancers) are constantly experimenting with different techniques, looking for your own unique style. But start learning break from three directions: the upper and lower break, and also elements of power tricks. Learning break dance from beginner requires bi-boy not only patience and good physical fitness, but also courage. 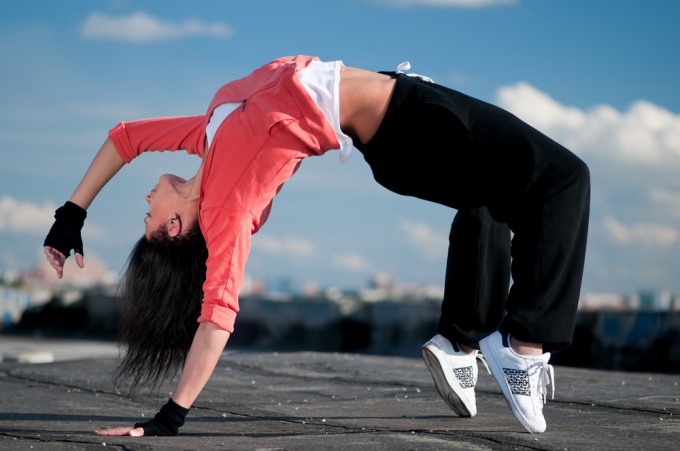 Instruction
1
Start learning break best with physical exercise. First of all it is necessary to strengthen the abdominal muscles and hands. And to train the flexibility of tilting in different directions, including back (try to reach hands to heels, at first this can be done alternately, the bridge is also a good exercise on flexibility). Once the muscles are strengthened, you can do handstands and head first, relying on the wall, gradually more and more moving away from her. A good tool for balance training will serve and push-UPS on his hands from the rack.
2
Hand in Work or "Wave hands". Pull your hands in front, palms face down. Make the tassels move as if you want them to slip under some horizontal object works with only the brush. When the execution of the wave brushes would be ideal add wave the shoulders. Push one hand forward, then back, then the same with the other hand, two at a time. Then add the elbows, the wrist, the need to deploy to one another. Control the speed of the wave.
Arms out to the sides and lock at the level of the upper arms parallel to the floor, palms facing down. Continue to let the wave watch hands. First, the waves diverge in different directions, then try to create one wave with both hands, then start a wave with one hand, and, having passed through it, finish the other. And in the opposite direction.
Wave through a body or Wave through the body." This element requires a lot of focus. When this wave starts from the top down and bottom up. In the first case the wave starts from the head. Imagine that your eye level is an obstacle, for example, a stick. In order to overcome it you don't squat, just like "dive" head under it, then bends the neck, chest, abdomen, pelvis, and knee with the feet. After one part of the body arched and he came the next one, coming back. Wave must not be interrupted, and the movement should be soft and smooth.

Wave bottom runs exactly the same, only in reverse order, from the feet to the head. Then proceed to wave one and in the other direction without stopping.
Walking Moon or "lunar gait". In order to learn the famous walk Michael Jackson needed a comfortable and soft shoes, which can move stop. It could be sneakers, but with a thin sole. Learn gradually and easily to move your feet. Next, put your right foot on the heel slightly forward, and his left on the sock. Then the right leg gently runs along the left and becomes on the heel the left with some displays and getting forward on the heel. Further, the left foot moves in a similar way on the right. Try not to pause between movements of the legs, and to achieve a greater effect over time, you can begin to let the wave of your hand.
3
Dance or Movement on the dance floor." There are several types of movements. Single code only on the dance floor one dancer, that is you. In this case, you set the rhythm and sequence of elements, don't be afraid to experiment. In this case, the most impressive is the movement of an imaginary square, i.e. in a limited area and not around the dance floor.
Doubles, when on the dance floor moving from two dancers. In this case, you need to work in advance a particular combination of elements and execute them simultaneously or in turns, as if talking to a partner in the dance.
Command on the scene more than two people. Usually all dancers perform the same elements in the same rhythm. The team is so that partners did not touch each other in dance and also do not obstruct the neighbors. Typically, dancers stand in staggered manner.
4
The lower break is divided into four areas. Uprock and toprock (not the lower break, but close), Spining moves or power moves (power components), Freeze (fixation of body when a certain item), Footwork (footwork).
5
The wave is not professional dancers, but for beginners is a great start. Lying on the floor, let the wave: first, with a dance floor, touching my arms, then chest, then legs. In dance, a dancer from falls on the hand.
Hands and feet – performed from a standing position. Stand up, then jump, landing on hands (feet in air), push off with hands and feet back and landed on his feet. This item is better to run multiple times.
Stilts – starting position while standing on hands. Feet in the air, one in front and one behind. Jump on the hands and simultaneously change the position of the legs, i.e. the leg that was in front goes back, and the one that was behind is now ahead.
Backspin or Twist at the back." It all depends on the swing legs. Starting position sitting on the floor, left leg extended forward, the right bent at the knee. Then abruptly straighten the right leg, throwing it to the left as far as possible, i.e., legs crossed. Left foot sharply under the right carry. If done correctly you should develop enough speed to spin on your back. For more speed, pull up his legs to his chest and crossed. It is important have to spin the blades. If you get up on top of the blades, you can increase the speed. Impressive look also jumping during spinning.
Tumbler – initial position standing up. Are falling back and doing a somersault, climb on his hands.
Spring – initial position any. From a standing position fall on his back without using his hands and jumping to his feet. From a standing position, simply jump to his feet without using his hands.
Turtle or Turtle – Run on his hands in a circle. A fairly complex power element of the lower break is executed only when the physical form of the dancer. Press your elbows to press and stand on hands. Try to stand on one hand, the second only slightly helping to keep the balance. Once you can confidently stand on each hand, not supporting himself second, begin to move in a circle. A good speed to do Tatl is easier. Professional b-boys not just revolve around its axis, but run in different directions.
Cricket or cricket - Bouncing tuttle. Stand on one hand and help himself to jump. The speed depends on how close to the body is free hand. The hands should touch the ground alternately.
Slide on the head – is performed in a special cap, in which sewn soft lining and outside sewn any slippery solid matter. Or you can spin in the helmet. And in any case it is impossible to do it without her. Run, jump on the head and the inertia of the slide, important during to remove his hands. The second variant of execution: stand on your head, your feet are parallel to the ground. Pushing hands going forward.
Headspin – torsion on the head. Start to learn just to stand on my head, without hands and not pulling in any direction. Then slightly push down with your hands and pull the body in the direction of torsion. Hands it is necessary to keep so that they do not interfere with the torsion. Gradually increase the force of ottalkivaet. Feet during torsion can be in three positions: side splits, the legs slightly bent at the knees; bent at the knees and lowered to the face and feet together stretched out perpendicular to the ground.
Useful advice
If you're exercising at home, clear as much space to avoid damage to home furniture, and also to not stumble on some corner.
Is the advice useful?
Присоединяйтесь к нам
New advices