How to determine the distance to lightning

Lightning usually occurs as a bright zigzag flashes in storm clouds and accompanied by thunder. Its electrical discharge up to 100 000 amps and voltage of several hundred million volts. To determine the distance to lightning, you need to calculate the time in seconds from the flash until the first thunder. 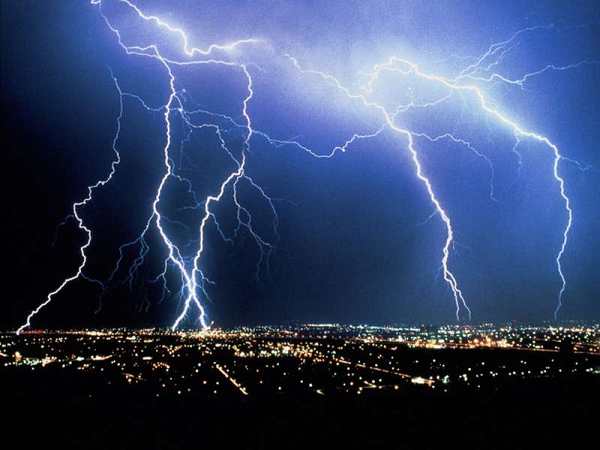 Related articles:
You will need
Instruction
1
Lightning is a threat to human life, natural phenomenon. However, ironically, it is the fault of the people they are becoming more. This happens due to the extremely irresponsible attitude to the environment: pollution of air in cities increases the heating of the air environment and the rise of the steam condensate. This reinforces the electric intensity in the clouds provokes lightning discharges.
2
The need to determine the distance to lightning was caused not only by the need to expand the horizon and the elementary instinct of self-preservation. If it is too close and you are in open space, it is better as quickly as possible to escape from there. The electric current chooses the shortest path to the ground, and the skin is a great conductor for it.
3
Start counting seconds as soon as you see the sky light flash, use a clock or stopwatch. As soon as you hear the first clap of thunder, stop the account, so you get the time.
4
To find distance, you need time multiply by speed. If accuracy for you is not very important, then it can be taken equal to 0.33 km/s, i.e., multiply number of seconds by 1/3. For example, you estimate the time until the zipper was 12 seconds, after dividing by 3, you get 4 km.
5
To determine the distance to lightning more precisely, take the average speed of sound in air is equal to 0,344 km/s. Its true value depends on many factors: humidity, temperature, type of terrain (open space, forest, urban high-rise buildings, water surface), wind speed, etc. for Example, when rainy autumn weather, the speed of sound is approximately equal to 0,338 km/s, in summer the dry heat is about 0.35 km/s.
6
Dense forest and tall buildings significantly slow down the speed of sound. It is reduced because of the need to go around many obstacles, diffraction. An accurate calculation in this case is quite difficult, impractical and most importantly: despite the fact that lightning does not hit the earth, it may strike a tall tree near you. So wait it among low-growing trees with dense foliage, best squat, and if you were on a city street, then take cover in a nearby building.
7
Pay attention to the wind. If he is strong enough and blowing in your face from the zipper, then the sound goes faster. Then its average speed can be taken approximately equal to 0.36 km/h When wind direction from you to the lightning the sound movement, on the contrary, slows down and speed is approximately equal to 0,325 km/h.
8
The average length of zipper up to 2.5 km and extends to a discharge distance up to 20 km, and Therefore should be removed from the open space of the nearest building or structure. Remember that when approaching lightning need to close all doors and Windows and unplug electrical appliances, since it can be defeat through the antenna and network to harm your technique.
9
The lightning are not only land, but also vnutrioblastnaya. They are not dangerous for those who are on the ground, however, can damage flying objects: planes, helicopters and other vehicles. In addition, a metal object caught in the cloud with a strong electric field capable of supporting, but not to create a charge can initiate lightning and provoke its appearance.
Note
Interesting fact: some native American peoples struck by lightning is considered a kind of initiation, necessary to achieve a shaman of higher level abilities.
Is the advice useful?
See also
Подписывайтесь на наш канал