How to get sulfur

Sulfur is a flammable chemical element that is a nonmetal. People have used sulfur since ancient times, when such science as chemistry, and even did not exist. Alchemists believed that sulfur, like mercury, is a supernatural substance that it is a mandatory component of all matter, marking the element of fire. Sulfur is mostly extracted from natural deposits. But it can also be obtained by other methods. 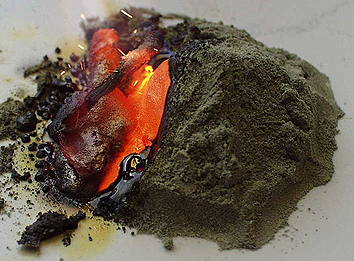 Related articles:
You will need
Instruction
1
Prepare a solution of sodium thiosulfate in distilled water. Next, take an ordinary vinegar, or any other carboxylic acid, which is not a pity and a thin stream, priivate it to sodium thiosulfate, not forgetting to stir the mixture.
2
On the bottom will begin to precipitate yellow precipitate is sulphur. Wait until the process is finished, drain the liquid and allow the sulphur to dry out.
3
Take the tube, put a bit of iron sulfide, and add to it hydrochloric acid. Close the vial sealed with a stopper with a gas outlet tube. The reaction of iron sulfide with an acid will release hydrogen sulfide.
4
In another test tube pour concentrated sulfuric acid and place in the vapor tube. The hydrogen sulfide reacts with sulfuric acid, forming water, sulfur dioxide, which gas comes to the surface and the sulfur that will remain at the bottom of the tube in the form of sediment. After filter the precipitate, wash it with water and allow to dry.
Note
Getting sulfur with hydrogen sulphide, pay attention to tightness of connections of the equipment. They try not to breathe hydrogen sulfide is very poisonous. It can be identified by smell, it smells like foul eggs. Released sulfur dioxide, too, should not breathe, better experience, play outdoors.
Is the advice useful?
See also
Подписывайтесь на наш канал