How to know the sex of fish

Aquaria – an interesting hobby, but for the beginners it is advisable to purchase the most common and undemanding to maintenance of fish. But if you want them also to breed, the ability to distinguish gender is necessary. 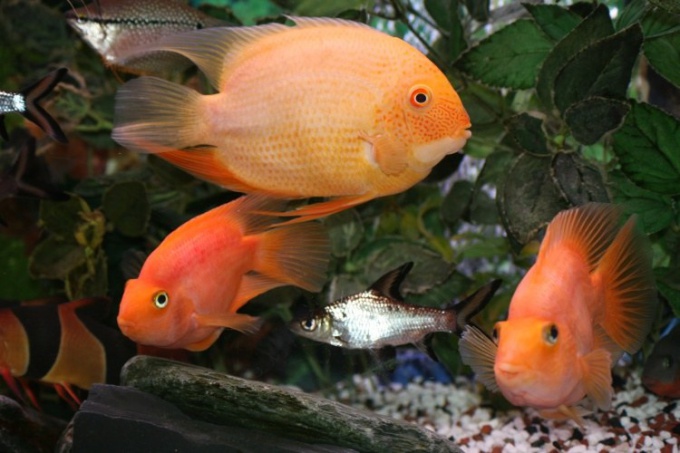 Related articles:
Instruction
1
Gold fish (vualehvostki, telescopes, livingonlove, comet, etc.) Pay attention to the shape of the abdomen: if it is rounded, then you have most likely female. But some of the fish having an elongated body, like that of comets in this way to distinguish gender is almost impossible. Look at the front fins, the males have notches, in addition, in the mating season on his Gill covers there are cusps.
2
Live-bearing fish (guppies, mollies, platies, swordtails, etc.) the Male guppies have brightly colored, have beautiful long tail and fins. Females, on the contrary, nondescript. Swordtails have elongated in the form of one or two swords of the caudal fin. All zimorodok are distinguishable by gonopodia – body for fertilization of females.
3
To determine the gender of the skalyariy difficult, although there are some differences - the male is brighter and has a slightly convex forehead, but it does not give 100% certainty. Better choose the right formed a pair of angelfish usually find a life partner for yourself at a young age.
4
Gourami is also hard to distinguish. Look at the shape of the dorsal fin. In males it is more pointed. After reaching fish genderthe new maturity can be seen as a male courting a female.
5
The gourami is already in 1.5-2 months, get a bright color, which can determine gender of fish. Males have a pointed fin on the back and red antennae. The female, on the contrary, the fin is rounded, and the antennae yellow. During courtship, the male becomes much brighter and chasing the female, then builds a nest of air bubbles.
6
To distinguish catfish, you first need to determine which subspecies is in question pertains to fish. If this is difficult, look at the dorsal fin. In some males it is high, luchevidnye, and the female rounded. Another note on the pectoral fins, the males of some subspecies are notched or fin sharp. In addition, if you look at the fish from above, the female will stand out thickened abdomen.
7
Bettas are very beautiful aquarium fish, males are much more intensely colored, and the fins much longer than in females. In addition, if you get two males, it to live peacefully in the same aquarium, they will not, it is because their names are still fighting fish.
8
Barbs (Sumatran) have elegant floorsOATUU color. On the dorsal and anal fins of the males is a bright red border, at females it is transparent, faded.
Useful advice
To learn more about these and other fish can be one of the sites at the aquarium or purchase specialized literature.
Is the advice useful?
See also
Подписывайтесь на наш канал