As in the game "Terraria" to find the flying island

Terraria, like many other "sandbox", now very popular. Despite quite simple graphics and two-dimensionality, it is interesting to its fans a variety of different locations, a certain variety of game missions and variety of resources that will get. Truly unique materials can be found in the so-called floating Islands. 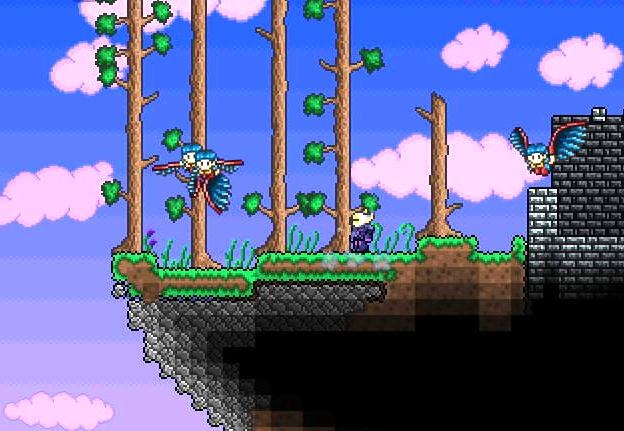 Where there are flying Islands

Floating or flying island, the location is very interesting. Here the player's task is the extraction of resources is complicated because he has new enemies - harpy, and Wyvern (the latter is present only when switching to hardmod). However, even a hypothetical opportunity to meet with them scares not all gamers - not least because the reward in case of victory can be really worthwhile.

On the flying island, the player will find the resources that will not occur in any of the other places. For example, taking paridene from drops lucky horseshoe that increases jump height, red ball, the sword, "star fury", causing the enemy increased damage due to the use of the heavenly bodies, etc. sometimes This wealth is in the chests in these locations. The only problem is there's still a bit hard to reach.

So that the gamer are not wandering aimlessly around the game space in search of a flying island, it is important to know where it's even possible to detect it hovering above the ground a cluster of blocks (the main ones being cloud). On a small map of the most probable height for his discovery – 453 ft, on average approximately 650, and the large – approximately 818.

How to find floating Islands

For orientation in space, the player does not hurt to use a depth meter or GPS. The first of them allows you to see the height of location of the player in feet. For its production requires four gold, eight silver and ten of copper ingots. Sometimes you can get this accessory ready - if he droplet with bats. GPS shows not only the depth/height of location of the player, but also a distance from his spawn. To make it can only in the workshop of the inventor and of rather expensive items, depth gauge, compass and the gold watch.

However, the aforementioned devices will only allow you to determine the coordinates, which are the character of gamer, but to find flying Islands their help will only be relative. A slightly more accurate method would be a shot in the air over them. Thus it is better to be in a forest biome, because it is over it most often located on the floating island.

For shooting suitable water shot (a magical weapon that exclusively gets in prison on the shelves) or meteorita bullet. The latter may be crafted on an anvil (made of lead or iron), and its production requires meteorology the bar and 25 musket balls. If after firing up any of these bullets they will ricochet means the game definitely has a certain something. It is possible that there will be a flying island.

Meanwhile, at the initial stage of the gameplay resources to the manufacture of such ammunition in the inventory, as a rule, not yet. Therefore you should use more simple weapon - a BB gun or space gun. Shot of them up, you have to listen to the sound. If it seemed that the bullets fall into the ground or in the vine, almost certainly this would mean that the gamer is stuck floating island.

Another method of their search is good only in the case when the player is in the Arsenal already has a potion of gravity. It is done at the alchemy station from dead grass, the fire-flower, a pen, a shimmering root and, of course, water bottles. This drug need to drink and just float at the desired height, looking for the flying Islands. It's important to do it quickly, because the potion only works for three minutes.
Is the advice useful?
Присоединяйтесь к нам
New advices