In 2004, on channel STS started to show the animated series "Smeshariki", created with the support of the Ministry of culture of the Russian Federation and educational project "World without violence". Currently, the cartoon is broadcast in 60 countries with a daily audience of 50 million people. 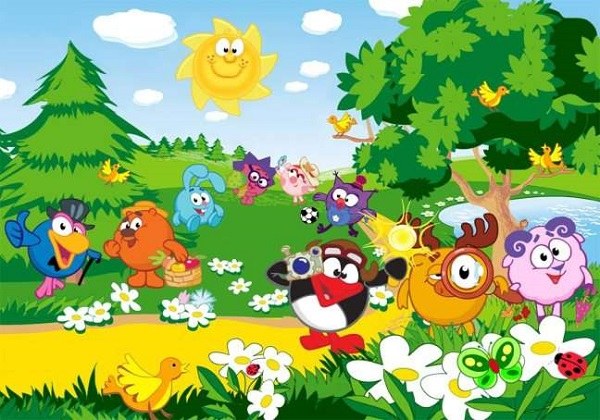 The word "Smeshariki" - a contraction of the words "ridiculous" and "balls". In the cartoon talking about funny all the creatures that live in a fictional world. Each character has its own history and individual character. Among them there are no negative characters.


Each episode tells about some problem situation, which can meet the baby in life. Although the plot of the cartoon is built on a child's naivete and simplicity, it hides a serious philosophical themes. Therefore, Smeshariki and interesting to adult viewers. Duration of one series is 6 — 10 min.

Croche - energetic and funny rabbit. He is voiced by Anton Vinogradov. Croche adventurous, go Hiking and swimming underwater, doing different adventures, and often interrupts the interlocutor and conducts simple experiments. A favorite expression of the rabbit is "Tree-needles".


The hedgehog is the best friend of the Twins, serious and conscientious character. In the first series he was voiced by Anton Vinogradov Vladimir Postnikov. The hedgehog is shy, slow, and likes it when everything is quiet and peaceful. He is too considerate and sensitive to others. Suffers from claustrophobia, gathers a collection of wrappers, cacti and mushrooms.


Barash — poet, writes poems about love and sorrow. The voice of the hero Vadim Bochanov. Barash is in love with Jane, always worried about other children. He is too touchy and requires a lot of attention from others. Knows several foreign languages and knows how to knit.


Nyusha is a girl pig, dreams of becoming a Princess. The character is voiced by Svetlana Pismichenko. Nyusha loves fashion, watching their appearance, manipulate others and wants to be the center of attention. She's a sweet, sociable, but at the same time, Moody character.


Kar-Karych artist Raven, who loves to brag a lot and talk. He is voiced by Sergei Mardari. Kar-Karych very knowledgeable, has hypnotized. He is frequently approached for some advice.


Kopatych — kind bear, who keeps a vegetable garden. The hero is voiced by Mikhail Chernyak. Kopatych has strong character, very strong, direct, but short-sighted. His favorite expression is "Bite me bee. In the cartoon he has a niece Stepanida, who voiced Xenia Brzozowska.


Moose is a scientist. Knows astronomy, chemistry, biology and physics. Even has a Nobel prize. The character is voiced by Mikhail Chernyak. Moose loves to read, his house is a huge library. Also often plays computer games.


Savonia is an owl-doctor. Her character is voiced by Sergei Mardari. She loves the fresh air and loves sports. Savonia pragmatic, economic and quite sentimental. Kind to your health. Lives in the hollow of a tree.
Is the advice useful?
Подписывайтесь на наш канал