Why peppers do not grow

Pepper vitamin C content, second only to rose hips and black currant, and vegetables are among the absolute leader. But a large amount of this vitamin is not its only advantage. Of vitamin A in it more than in carrots, and aromatics peppers helps release "happy hormones" - endorphins, which has a beneficial effect on the nervous system. Vegetable growers grow different varieties of peppers, they are not immune from various challenges, for example, pepper does not grow well. Why? 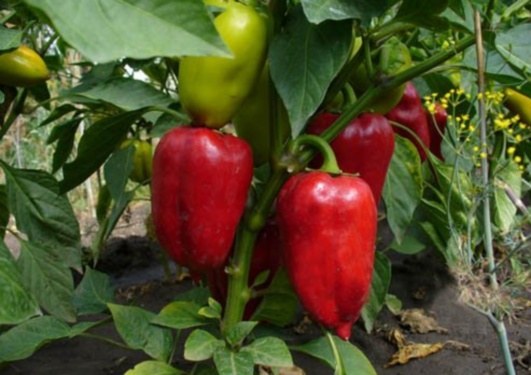 Related articles:
The disadvantage of malaperis – loving and capricious plant, the optimum temperature for its growth and development is 25-30 OS. If the weather is too hot, raise the humidity, opening the Windows and doors in the greenhouse. If the peppers are growing in the open ground, protect them from direct sunlight. Before planting the plant temper. To do this, expose seedlings to the open air.The disadvantage of playparty very demanding to soil moisture. Water the plant two to three liters of water, and it should be settled and room temperature. Better are only watering in the morning and only at the root, that is, not falling on leaves and fruits. Deficiency or excess of mineral udobreniya likes fertile soil, but excess nitrogen fertilizer reduces the yield is the fruits are not growing. After planting plants in the ground fertilize it at least two to three times. The first feed should consist of a slurry, diluted with water (1:10). The second feed must be made from fermented chicken manure with the addition of superphosphate (1:12). Feed the plant and root system during the growth, make it balanced dressing. Make dusting the plants with ashes.Bacterial boleznennaya affected by any bacteria, it is very difficult to save. If you find that the peppers began to fade, ceased to grow and to bear fruit, remove them so as not to infect other plants. If bacteria was struck by the seeds before planting, treat them with potassium permanganate or fundazol.Wrong planting of plants in kruntyaeva plants according to the scheme 30*30 65*30. The stems of the peppers down into the soil to the first pair of strong leaves. Remove excess shoots are not needed.
Is the advice useful?
See also
Присоединяйтесь к нам
New advices