How do you know that son smokes

Smoking among adolescents is one of the hallmarks of growing up, so many are trying to smoke in the 11-12 years. Some teenagers Smoking is addictive, they are no longer able to refuse it. It is important for parents to understand the signs that will say exactly what their child smokes. 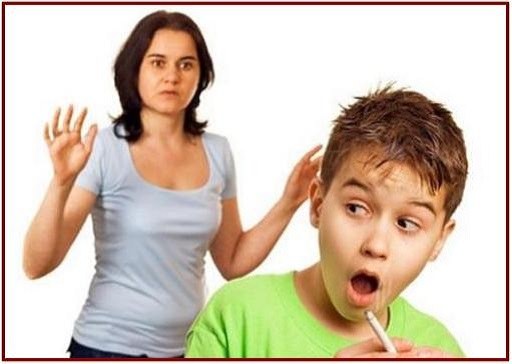 Related articles:
Understand, smoke son, a simple observation. Do not try at the first suspicion to turn out the pockets of the child, scold him and blame something, to check his belongings. Of course, parents can say that they have every right to do, but you only will lose the trust of the son. Better instead, watch him for some time: patience and attention can say more than interrogations and orders. If the child suddenly began to miss from school, got himself another company, is clearly hiding something, not talking openly, sulky - there is a reason to tell my son. When the family created a trust relationship, such a conversation will be able to help, the teenager confesses, why he smokes, you make sure that the suspicions were unfounded. However, there are more certain signs of Smoking.

Signs that teenager is Smoking

The surest sign of Smoking, of course, the smell. It comes from the hands, clothing, hair, mouth. Of course, the teenager can be justified by the fact that his friends smoke and he's just standing around. But breath is not justified by anything. And in the hands of the traces of Smoking are only when the person smokes himself. To remove the smell of teenagers have resorted to trickery: too chew mint gum, RUB hands with lemon zest, puts in her coffee. If you notice this behavior of his son, he probably smokes.

The second sign is a cough, especially when it appears unclear why. A couple of times it can be written off on a cold, but still coughing from the cigarette can be recognized by ear - it sounds dry, strained. If the child was more likely to catch a cold or he headaches is also a sign that parents need to think about.

Smoking greatly affect the appearance, especially in adolescents. Their body and so is undergoing changes, very unstable, and addicted to cigarettes only aggravates the situation. The skin of a teenager becomes grayish or yellowing, cracks appear on the lips, worsening the condition and color of the teeth. You can even take your son to the doctor or the dentist - they can almost accurately determine the smoker.

Smoking teenage should always be in stress to hide their harmful hobby. So he might act more reserved and nervous. Especially nervous, he has when there is no possibility to get out of the house for a long time and therefore smoke it too can not. This kid could rush around the house, to walk aimlessly from room to room, to snap, to argue with others, although no reasons for this, it would seem, no.

Take a look and to what your child spends money. If there are any unreasonable expenditure - it is a sign to think about. Buying cigarettes doesn't happen every day, but still needs to take place with sufficient frequency. So you can keep track of when the son needed money, interested in what he spends. Besides, if there is a Smoking parent, you can look at not lost his cigarettes. When a teenager smokes usually easy to find traces of tobacco in his pockets or at the bottom of the backpack.

If you found that your son smokes, do not immediately apply serious measures to scold and punish him. The first step is to talk, to tell about the dangers of Smoking, the benefits of a healthy lifestyle. You need to ask about the reasons which forced him to resort to Smoking, maybe that's how he solves some of his problems and penalties you will only aggravate his situation. In addition, positive motivation helps to better orders. Promise the child something for his quitting. Let's say you were going to give him a new bike. Agree that they will do so only after the rejection of cigarettes.
Is the advice useful?
Присоединяйтесь к нам
New advices