The phrase "3D cinema" is firmly entrenched in the minds of modern viewers. And that's what the 7D theater is known far not all. It turns out, during a session in that cinema seat beating from the inside, as alive, moving, vibrating, doused by the rain and blowing wind. And even in the audience can see the smoke, bubbles or even real snow flakes 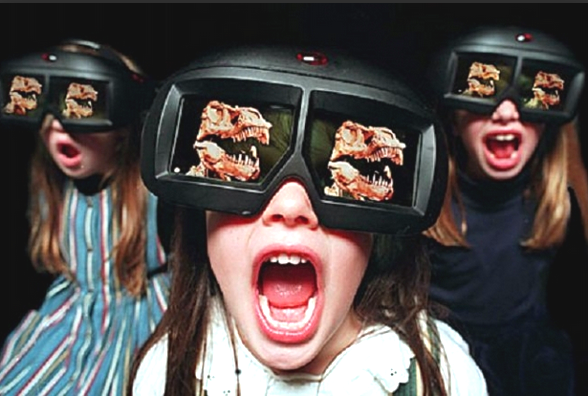 7D cinema is a fascinating entertainment for children and adults. In the 7D cinema blurs the line between audience and screen, the audience is completely immersed in the story and feel the same as the heroes of films like this is they just took a ride on a roller coaster, visited the blood-thirsty jaws of a dinosaur or got wet under a rain shower in the wilds of the Amazon. Stereo sound, moving floor, chairs with special effects, special stimulation in the form of a flash of lightning, rain drops, virtual smoke, smell multiplies the effect of watching the movie and give unforgettable impressions.

In the 7D cinema films are shown on a cylindrical screen that surrounds the auditorium on three sides. The screen remains out of sight. Special glasses with stereo sound effect allows you to see three-dimensional images beyond the screen.

Surround sound is created through a powerful stereo system installed in the cinema. Additional speakers built into the headrest of every visual seat. This allows you to recreate the effect of the presence, when the viewer think that someone walking behind him.

If the audience sees on the screen of a volcanic eruption or an earthquake, the vibration will cause them to shudder, as if they are in the midst of the cataclysm. In one of the films the main character starts to vibrate the phone at the same moment a slight vibration under the hand feel and the audience sitting in the cinema.

The movement of the chair

In the 7D cinema, the viewers sit in the chairs, placed on a special dynamic platform. The movement of this platform is clearly tied to the camera movement in the film. Viewers can experience a free fall, hard braking, jumps, collisions, trips on an uneven road surface and other effects.

While watching a movie 7D, viewers may feel smell, which filled the auditorium with a special spray. For example, the audience can feel the aroma of freshness, when the film's protagonist coming to the pond.

If the protagonist of the film has been exposed to rain or accidentally sprayed a passing car, and the audience at this point, fly a drop of water. An example of American practice: when a dinosaur devour his next victim, the audience, fall a drop of warm water, which mimic the victim's blood.

Thanks to the fans that are integrated into the visual chair, the audience can feel the breath of wind. Moreover, if the main character rides a Bicycle or motorcycle, the wind blowing the viewer in the face if he's watching the landing of the helicopter, then air movement will be chaotic.

The lightning effect is accompanied by a bright flash on the screen and the powerful vibrations of the visual chair. Using the lightning effect, the audience can feel not only the power of the corresponding natural phenomena, but also other effects, for example, hit with electric shocks.

In some 7D theaters while watching films on the audience showered the real snow flakes. The snow is made artificially and sprayed the hall with special snow cannons.

If the plot of the movie the main character is watching a volcanic eruption or involved in fire fighting, in the auditorium using a special device starts the smoke.

This special effect is frequently used in Comedy movies. Imagine that the main character accidentally swallows soap, and from his mouth out soap bubbles. At this point, the room included a special generator, and in the hall hundreds and even thousands of these bubbles.

The effect of movement under the feet

The effect of movement under the feet you can feel when the film on the floor of the run mice, crocodiles, frogs jumping or crawling snakes. Effect is included in the most unexpected moment, forcing the viewer to jump from surprise.

This is only the most popular, the most used special effects. In addition to these effects there are many others. If you haven't had a chance to visit the 7D cinema – be sure to go and invite a little adventure of their friends and relatives.
Is the advice useful?
Подписывайтесь на наш канал