When the baby starts crawling

Crawling becomes for the parents a long-awaited stage of development, along with independent turns the baby on the belly or hold of the head. However, there is no clear and single age, where absolutely all babies start to crawl. Moreover, other kids and completely bypassed that stage of physical formation... 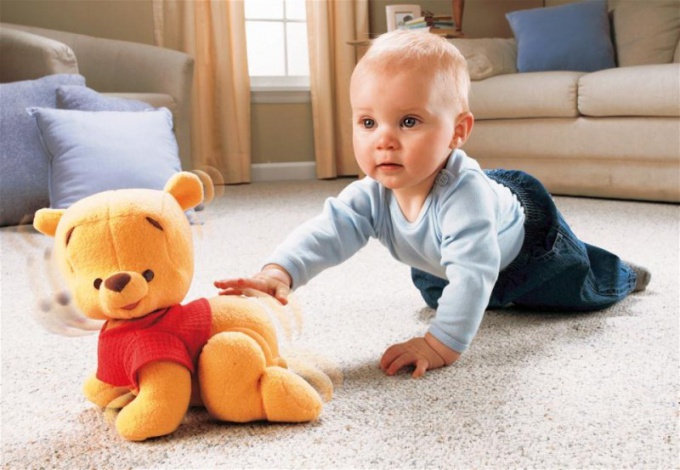 When children begin to crawl

The early and active children from 5 months showing the world this forever. But the vast majority of babies begin to crawl at 6-7 months, as part of children "retard" and up to 9 months of age.

According to scientists, there are some differences in the pace of development of girls and boys. So, babies begin to crawl at an average of 2.5-4 weeks earlier than the kids.

Not everyone is born to crawl...

Some babies in their development pass through a phase of crawling and immediately after seat start walking. Parents should not worry on this account, as pediatricians, fully acknowledge the right of the" kids for such behavior. In other words, it is considered a normal variant.

How to help your child start to crawl faster

Experts advise parents to remember that all children develop at their own pace, and therefore do not need to chase the "neighbor's son Forum", which started to crawl at 5 months, and regret that their baby has just crawled by 8 months. However, if at the end of the 9th month the baby is still not crawling, there is a reason to consult with your pediatrician about the development of the musculoskeletal system of the baby.

There is a perception that parents can help the child slightly to hasten the moment when he will be able to crawl. The simplest exercise for this is as follows. The baby lay on the bed stomach down, and at a distance 20 cm in front of him feature his favorite rattle. In an attempt to get a toy baby will start to actively touch the legs and handles, and after some time I bet he'll be crawling to your goal.

However, such exercise is the reverse side. If the child is not ready to crawl and will not be able to reach his favourite toy, it will only upset him. In this case, it is not necessary to provoke him, because the kid himself is interested in exploring the surrounding world and objects. As soon as the baby is ripe for the development of a new skill the movement, he did not need such incentives, or any other.

It should be remembered that the child is a person with character traits, but still dependent, underdeveloped mentally and physically. Many modern authors of books on care of babies Express confirmation of the view that respect for children – a mandatory attribute of a successful education and the full development of kids.
Is the advice useful?
See also
Подписывайтесь на наш канал