How many punctuation marks in the Russian language

Count the number of punctuation marks in the Russian language, not so difficult. It is sufficient to take arbitrary text with direct speech, at least one clarification in brackets and quote for quotes. Some of the signs, ubiquitous, Russian punctuation have nothing to do, but on others not much is known, although many of them are "dinosaurs" of writing. 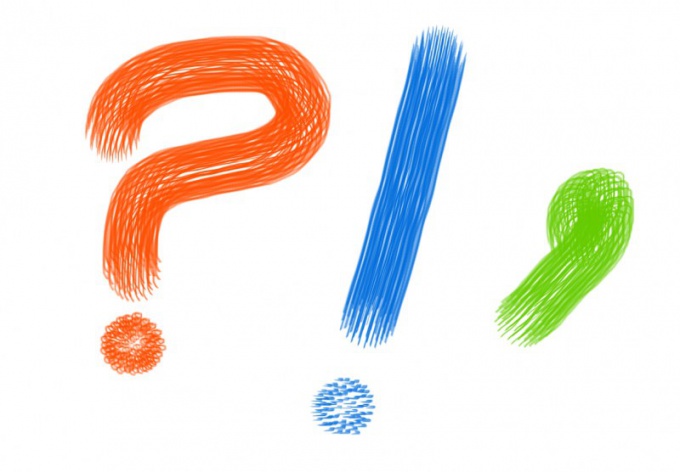 Together with the emergence of writing have emerged and the need to somehow indicate to the reader that the proposal is complete. The progenitors of modern points are the straight vertical line (Sanskrit) and a circle (。, the Chinese language). In Russian the point, for the first time is recorded in the monuments of ancient writing. Traditionally, the period is placed at the end of each sentence except for the headers and where sentences end with an ellipsis, a question mark or an exclamation mark in combination with the quotation marks.

This sign, though appeared much later point, but entered the Russian grammar at the end of the XVI century. It was used by Lawrence Tustanovsky, the compiler of one of the first handbooks of Slavic Philology. Most often, the colon precedes the listing or registration of direct speech (quotations), but there are also those difficult cases in his productions, as the use of a colon instead of a Union. For example, between the sentences in the description of feelings: "we came to the river, find a boat, and in it — one".

A pause of incompleteness of the speech hitch — dot — are described in "the Grammar of the Church Slavonic language" Pushkin's contemporaries Alexander Vostokov, however, some researchers have noted that dot had found earlier, and Vostokova was only enshrined in the scientific work, and in "Grammar" it is also called "preclusive sign"...

"Dot flourishes" arguing with a point for first place among the most frequent in Russian language punctuation. In medium difficulty the text to 1000 characters may not be a single dash or one pair of quotation marks or parentheses, but the commas will be required. And if the author is a lover of speed, and input words, then the comma will be the champion. The word "comma", according to the Soviet linguist Paul Black, comes from "tapati" ("clues"), but the sign is borrowed from the Italian language.

Another Italian invention, had moved to Russian language along with the printing press. This sign was invented and introduced in writing in the mid-15th century printer Aldus Manuzio. Using a semicolon he shared parts of sentences connected by meaning, but had an independent syntax. In the Russian language is used for the same purpose, and in complex listings.

On the origin of the dash there is no accurate data. Approximately corresponding in meaning to "dash" there are many ancient written artifacts. Modern its name it owes to France (for tiret from tirer, to pull), and in the Russian language, as suggested by most researchers, popularized by Karamzin, during which this sign was called "silence". Used in many occasions, the most famous of which — when the subject and predicate are expressed as one part of speech, as well as in the design of the replicas and dialogues. In Russian typography uses a long dash (—), and it is always separated from the previous and subsequent words by spaces, with the exception of its use in the intervals (1-8 August), although increasingly in place short, "English" dash (1-8 August).

Both signs appeared in the Russian language about the same time, in the middle of the 2nd Millennium BC are Both from Latin, where a question mark was previously a graphic reduction (by ligature) of the letters Q and O (quaestio, question) and was used in cases when it was necessary to point out the question and exclamation mark, from exclamation of surprise lo. Gradually both alloys steel self-nonliteral punctuation, and the original title received from: "interrogative point" and "point of wonder".

Pair sign, today referred to as brackets, once had a very beautiful name "roomy" or "local sign." In languages, including in Russian, the brackets came from mathematics, specifically from the record entered by the Italian Niccolo Tartaglia for radical values. Later mathematicians prefer for different needs square and curly brackets, and the round will remain in the written language to write explanations and remarks.

Another paired sign came into the language... of music notation and its Russian name received, in all probability, from the little Russian verb "to cavecat" ("to waddle-duck", "to limp"). And really, if you write quotes as taken from the hand of (""), they are very similar to paws. By the way, a pair of quotation marks "" are "feet", and the usual typographic quotation marks "" are called "Christmas trees".

Signs... but no signs

The hyphen, which is similar to the dash many take for punctuation, it is not. Together with the sign of the stress he applies to non-alphabetic orthographic signs. A common ampersand ( & ), though similar to the punctuation mark, but is in fact a ligature of the Latin et Union.

Controversial is a space. Its task is to separate the words, it can be attributed to the punctuation, but is it possible to call a void familiar? Except that technically.
Is the advice useful?
See also
Подписывайтесь на наш канал