What do you mean "French Breakfast"

"Eat Breakfast like a king" is not about the French. For residents of France, the Breakfast traditionally consists of fresh, fragrant pastries and hot Cup of coffee. French Breakfast is a whole ceremony like Japanese tea. It's a way to start the day with positive notes, pleasant aroma and energizing. 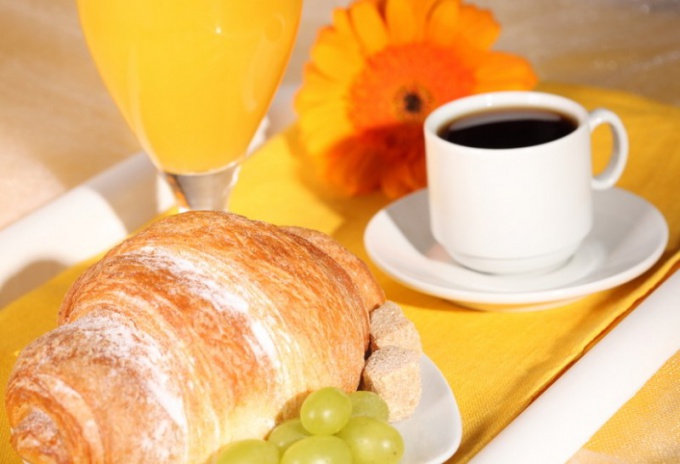 The French are not in a hurry. Genetic need for beauty and elegance for centuries honed daily rituals of most of the descendants of the Gauls. The Frenchman will never come to Breakfast without a shower and not brushing your teeth. Therefore, to the first food intake, it appears in all its glory, alive and fresh. Breakfast has never eaten in a hurry or on the go. A quick snack in the office is also unacceptable. Punctuality is not the most common trait of the nation, especially if you have to sacrifice the usual routine.

On weekends, especially in Sunny weather, the outdoor Breakfast could last until lunch. The French love to eat Breakfast in various bistro, looking at the people passing by and enjoying the morning.

What is "French Breakfast"

Traditionally, Breakfast in France is quite restricted in the choice of dishes. It is the Foundation of fresh pastries. It is well-known French baguette, brioche (lush sweet bread) or croissants. Moreover, the cakes have to be piping hot. No wonder the French bakeries are on every step. The French Breakfast consists of carbohydrates, proteins don't belong here. Buns and toast served with butter and jam, for filling croissants, use strawberry or apricot jam.

In the morning, the French drink coffee, and only its weak grade latte or the so-called American coffee with milk. It is served in a wide Cup resembling a bowl of broth to dip in coffee cakes. All this may be accompanied by a glass of freshly squeezed orange juice.

Alternatively, the table can be French toast with berries or pancakes with melted chocolate – they served for Breakfast to the children. Moreover, the French pancakes are different from Russian for its small size. In appearance they are more like pancakes, only thinner. The option of Breakfast at the French coffee is called "cold".

The influence of Western cultures reflected in the variety of dishes served for Breakfast in a French café. So there was a "hot" Breakfast. If you order it, you will get an omelet or fried eggs, bacon, salad and a portion of large slices of potatoes baked in their skins. For tourists from the Nordic countries omelet can be replaced by grilled salmon, and for Americans is the hamburger. However, the "hot" Breakfast and order the French at the weekend, when the morning meal blends in daytime.
Is the advice useful?
Подписывайтесь на наш канал