What's the easiest way to draw a person

The image of a person will not cause difficulties if you draw, proportioning. They affect not only the body but also the human face. It is important to sketch step by step – first create the schema, and then to give it shape. 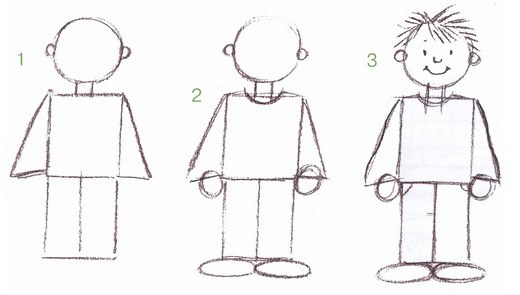 The image of a man

Put a sheet of paper vertically. Departing from the upper and lower boundaries at 2 cm, draw a vertical line. Divide it into 8 parts by nine horizontal lines.

Between the first upper and the second position the head. To do this, draw a vertical oval. The head occupied the upper gap. The remaining 7 will fall on the body and legs. These are the proportions of an adult male.

In the second and third interval on top make an outline of his body from neck to waist. The second will draw the neck, then shoulders. Draw upper arms to the armpits. In the third period make a sketch of the human body from the armpits to the waist.

Fourth, the proportion from the waist to the groin part. Fifth – it nearly to the top of the knees. The sixth ends with the bottom of your knees. It falls on the seventh calf, the eighth – on the lower part of the calf to the feet.

Arms and hands draw from the shoulders to the sixth horizontal line, that is, they end up at the bottom of the fifth part of the scheme.

Now go back to the circle. Divide it into 3 parts with four lines. On the border of the first and second lines to draw the eye. Above them the eyebrows. The second part is the nose. Draw a vertical line on either side of it put two dots are nostrils. In the middle third part of the draw of the lips. Draw the ears on the side, they are located on the line of the nose.

Erase the auxiliary lines. Draw over the schematic image of a man his clothes, and on his head is hair.

How to draw a woman

If you learn how to draw the man wants the child, then he would depict a woman. First, you need to draw a circle is the head. Let portray it 2 eyes, a straight nose and a mouth. Next, you need to put in the lower middle part of the head point. It's the pinnacle of an acute isosceles triangle. Let draws this figure. This dress women.

At the top of the triangle, on either side, you need to hold two lines – the hands of a lady. From the base of the triangle out 2 straight lines and legs.

A grown man can draw a woman more realistically. Make a face oval, round or triangular. In the latter case, a bit pointed to draw the chin and the upper part of the head may be rounded.

As in the previous case, divide the outline oval of the face into 3 parts. The eyes consist of two lines – the top and bottom of the arc. Eyebrows the same shape as the upper eyelid. It will draw fluffy eyelashes. The nose, draw an inverted letter "G". Lips – in the form of eight, are arranged horizontally. Separate the upper from the lower lip with a semicircular line, 2 extreme points which are raised, that the person was not sad.

Body paint in the same pattern as males, but the shoulders make narrower and hips rounded. Clothe the girl in a dress. Emphasize the lower part of the chest by means of two semicircular lines, the ends of which lift upwards. Draw the curls.