What the book is about "the adventures of electronics"?

Eugene Veltistova wrote a fantastic tetralogy "the adventures of electronics", which has become a favorite of many generations. This is the anthem of Cybernetics, its limitless possibilities. 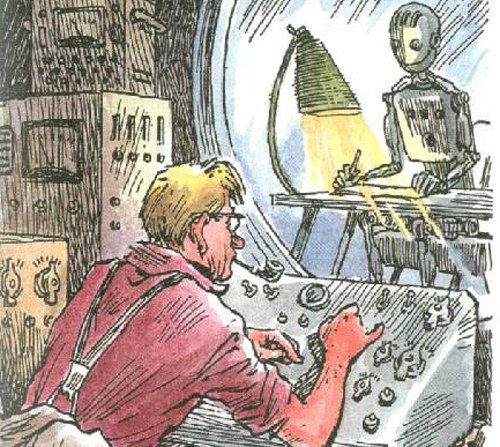 Related articles:
Eugene Veltistova was famous for his tetralogy about Electronics. It includes the book "Elektronik - the boy from the suitcase" (1964), "ressi - elusive friend" (1971), "the winner of the impossible" ( 1975), "the New adventures of electronics" (1989).

The heroes of the book - the seventh graders and then eighth graders seventies, which occur with wonderful cybernetic boy, created by Professor Gromov. Accidentally saw in a magazine a photo of Sergei Syroezhkin, Gromov decides to give his creation the appearance of this mischievous boy.

It so happened that Sergei and Electronics was found. It is built on the plot of the book. A dream come true syroezhkina. Cybernetic DoppelgangeR began to walk him to school, hitting teachers and classmates with his extraordinary abilities. Electronics have made a lot of friends, he began to like the girl, Maya, and Syroezhkin realized how sad it is when your place is occupied. He finds the courage to tell the truth.

Friendship electronics and syroezhkina gave the heroes what they had: Syroezhkin realized how important it is to make yourself, and Elektronik gained the ability to experience emotions.

In the story "ressi - elusive friend" Elektronik creates a cybernetic dog, which becomes a helper in the struggle with negative character background Circle that kills rare animals, making them thieves. Syroezhkina again confusing with Electronics. His assistant abducts the background of the Circle Mick urry to understand how Professor Gromov managed to create a robot endowed with human emotions. But friends with ressi punish the villain.

In the third part, called "the Winner is impossible," the heroes who are eighth graders and make discoveries that are not under the power of the scientists. They quarrel, reconciled, like normal children, but science fascinates them the most.

In the fourth part of "the New adventures of electronics" Gromov constructs a girl robot Alechko. The events of the story unfold in the camp, where Elvira, communicating with children, becoming similar to a person. Her care about the issues that are important to adolescents. She asks electronics what love is and is looking for the answer to this difficult question.


Electronics and Elvira at the end of the book become people.

The fate of the tetralogy Veltistova

Eugene Veltistova after the success of the book created the script of the film "the adventures of electronics", which they watch modern children. Electronics they know the movie, not the book.
Is the advice useful?
Подписывайтесь на наш канал