Where they filmed the TV series "Soldiers"

Russian Comedy television series "Soldiers" became popular immediately after its release in theaters. It is a joint project of the producer centre "lean-M" and TV company Ren-TV, who managed to accurately convey the life of a soldier and their relationship with superiors and with each other. So where is filmed this series? 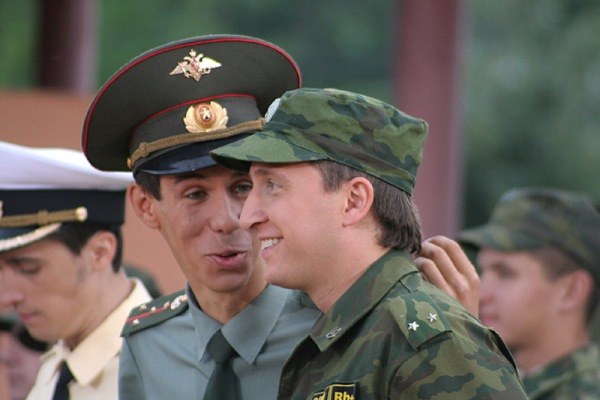 The series begins with the arrival of the army of two countrymen – the city's major Bears Medvedev and simple country boy Kuzma Sokolov. First, freshly baked soldiers are having a hard time because "old" bullied and beaten newcomers, and especially not accustomed to this environment, Medvedev. Over time, however, the children manage to adapt and join the team – Kuzma finds himself a new friend in the person of ensign Shmatko, and Medvedev manages to have a romance with a local nurse Irina

The TV series "Soldiers" was broadcast on television in almost six years, which is a real record.

Medvedev suddenly discovers that at the heart of the beautiful nurses claim not only him – his rival is a major Kolobkov, the Deputy commander of a part on educational work. Medvedev starts to fight with Koloboks, who even tries to kill the arrogant soldier – but love overcomes all obstacles, and wounded Medvedev six months earlier comesout from the army. However, the series still remain the ensign Shmatko and Kuzma Sokolov, constantly falling in different but often overlapping history.

The shooting of the series

For the filming of "Soldiers" its creators did not build a special set – the whole process took place in the training center of engineer troops located on the territory of Nakhabino (Krasnogorsk district, Moscow region). During the filming of the seventeen seasons of the series was filmed more than five hundred objects in the form of barracks, apartments and studios used thirty thousand kinds of props, from a military agenda and ending with the car "Ural". Costume designers for the film crew, the company spent more than a hundred cans of Shoe Polish and hand-sewed more than six thousand collars.

Only the series "Soldiers" consists of five hundred and fifty-seven series, which starred as cine and real recruits.

Six years on the air crew of the series, ate more than twenty eight thousand dinners at the headquarters, who previously played the role of an army barracks. The duration of the show and a huge number of episodes made the series "Soldiers" and a unique design rating of the Russian television, the show which continues to this day. The actors who played the roles of young soldiers and so popular with the domestic audience, got a start in the world of Russian cinema and is now actively starring in new movies and TV shows.
Is the advice useful?
Присоединяйтесь к нам
New advices