How to become a goalkeeper

A good soccer goalie must have a very specific set of qualities, some of which are innate, while others are quite amenable to training and development. 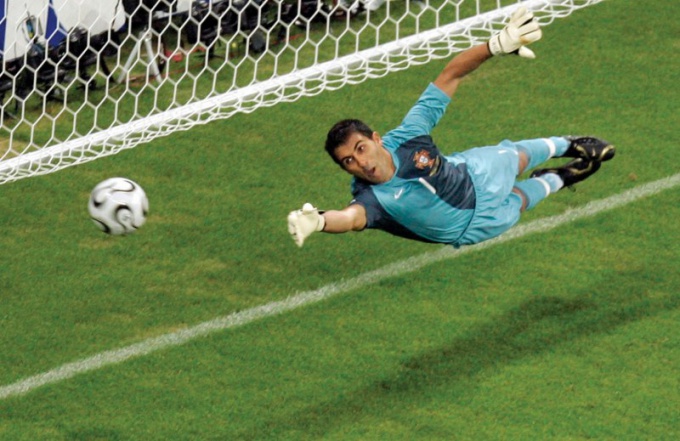 The quality of the goalkeeper

Soccer goalie is primarily associated with absolute fearlessness, he must boldly throw himself at the feet of the attacker at the exit, and take desperate leaps, trying to pull the ball from the top corner of the net, despite the risk of getting a painful blow from a ball or, worse, to hit the crossbar.

The second characteristic worthy of the goalkeeper - excellent response. The approximate speed of the ball after a heavy blow is about 80 kilometers per hour, and the record in this area belongs to the legendary Robert Carlos, after hitting the ball speed was 140 kilometers per hour. Thus, reflexes and fast reaction is the most important attributes for a goalkeeper, if you expect to succeed and make a career in football.

The third and most important distinctive feature of a good goalkeeper - cool. Failures happen to everyone, but the goalkeeper even after the most offensive conceding a goal must come together and continue playing as if nothing had happened. Pretty common situation when the goalkeeper after perfect errors is not able to continue the game at a decent level, starting to get nervous and make stupid enough mistakes - in short, loses his temper.

The goaltending and their development

If the above characteristics pertain more to human qualities, being, in General, traits that change is extremely difficult (with an exception response), you must pay attention to skills, the development of which for any healthy person.

Jumping ability. The standard height of the gate in big football is 2 meters 44 centimeters, a man of medium height not too easy to jump to the crossbar. But if the ball is flying right over you, and into the top corner? Door width - 7 meters 32 centimeters, so if you stand in the center of the gate, to repel flying in the top corner of the ball you have a few seconds to cover the distance of approximately 3.5 meters. Training this skill involves the performance of exercises on the jumping ability and the development of explosive strength of leg muscles.

Coordination. Every movement of the goalkeeper should be honed to perfection! In a critical situation no time to think, so all actions must be performed reflexively. So, the goalkeeper must return the ball directly in front of you and to the side, in a special way, turning the brush at the feet of the defender need to throw a verified motion to pick up the ball, and not get injured. Such nuances are many, and the only way to develop these skills - constant practice, the monotonous repetition of the same exercises to buy so-called muscle memory.

You have to forget about the habit to close my eyes when approaching the ball, goalkeeper is simply criminal! This skill is quite difficult to acquire, because of the need to overcome reflexes, based on the instinct of self-preservation, the strongest human instinct.

In addition, the goalkeeper must learn to control his defenders, to correctly build a defense, the right to exhibit a "wall" with the implementation of the standard provisions and accurately enter the ball in play, not allowing hitting the ball to the opponent on their half of the field.
Is the advice useful?
See also
Присоединяйтесь к нам
New advices