How to choose a real Armenian cognac with the purchase

Though the word "cognac" and is entitled to be the only drink given in the French province, but the store is still referred to as all drinks are made according to cognac technology. Aged in oak barrels grape alcohol cognac, the drink is quite exquisite and expensive – it often brings in the form of a gift that already speaks about its status, but often counterfeited. Good affordable cognacs are produced in Armenia, but they are when you buy in the store are often counterfeit. 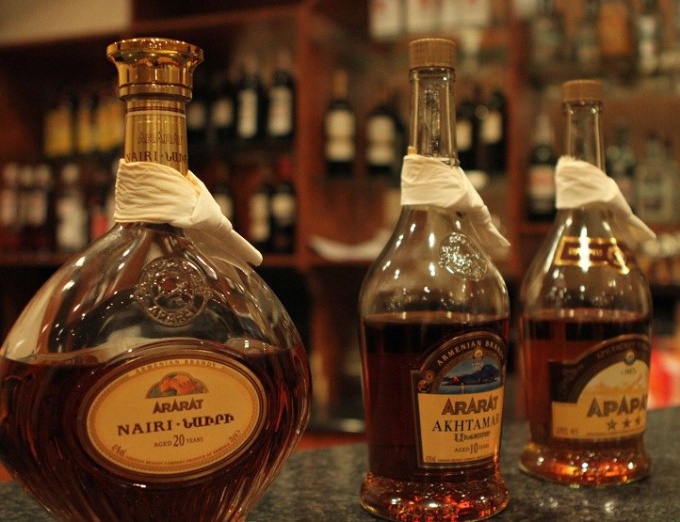 What are the Armenian brandies

Exposure of ordinary cognacs are indicated by asterisks: 1 year – 1 star. The minimum aging period of the cognac this "age group" 3 years, maximum of not less than 5 years. Age of vintage cognacs marked with letters. If the bottle says "KV - aged brandy, this means that before bottling it languished in oak barrels for at least 6 years. In the case when his "imprisonment" lasted for at least 8 years on the bottle says "KVVK - cognac sustained the highest quality. The letters "CS" - brandy old – they say that the drink is aged for at least 10 years, and "OS" is very old – at least 20 years. The collector's cognacs are older than 20 years of additional aging in barrels or in bottles for at least 3 years.

In store to distinguish the real Armenian cognac from a fake

Unfortunately, the main part of the famous cognac brands sold in quantities several times greater than what is stated in the records of the manufacturers. Are no exception and Armenian cognac. Choosing a beverage in the store, where has no possibility to evaluate its palatability, the first note on the bottle. Made of glass, it is, nevertheless, must look quite "dapper", no chips or cracks. Branded bottles with vintage and collectible brandy glass is decorated with a logo-print manufacturer.

The printing quality of labels has to be perfect – good quality paper, colors are bright, the letters are clear. The label should be glued over the entire surface, through it should not be visible glue. Inspect the tube – it should sit tight and damage on it are excluded. An indirect confirmation of the authenticity can serve as the match specified on the label or carton of the places where the cognac was made and bottled.

Cognac, especially aged, has a fairly high density. So, if you take the bottle in hand, and sharply turn it upside down, the liquid should not flow down the walls, and the dense mass to separate from the bottle of the day. Thus up must first rise of large air bubbles and then smaller is the density of the drink.
Is the advice useful?
See also
Подписывайтесь на наш канал