Why in bottles of alcohol lay a snake

It is hard to imagine that in Russia during the feast someone instead of the usual bottles of vodka or champagne will put, say, a bottle with a real snake inside. Meanwhile, for Asian countries it has long been almost a commonplace. 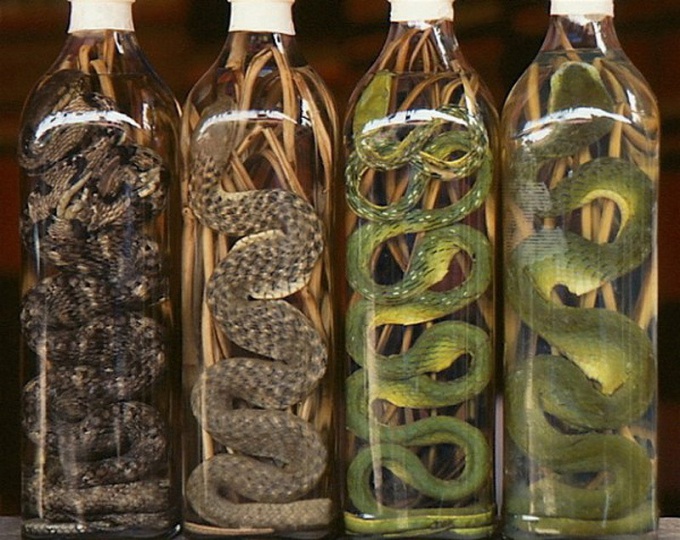 What are you drinking

The pioneers scary drinks have become Vietnamese. They started to add a bottle of wine most of these snakes, and then this exotic method of manufacturing moved to other countries in Asia.

Many connoisseurs of alcohol travel in the Eastern country it is in order to try these fancy drinks because they are prohibited in many countries, including the United States.


The formulation of such drinks can be very diverse. It is believed that the best alcohol is obtained from living reptiles. Snake, say, a Viper is placed in a bottle and pour alcohol – wine or rice wine, leaving a certain amount of air to some time after sealing the bottle, the snake could still breathe and was dying gradually, highlighting alcohol poison and other substances beneficial to the human body.

According to another recipe, cut along with snake venom and blood is added to a bowl of rice wine, drink it, and the meat and innards of a snake snack.

Often in bottles with unusual drinks also add Scorpions, lizards or insects. This is done with a purely decorative purpose, any special properties of these beings, the blame is not attached.

In Japan, prepare a drink MUSASHISAKAI sake, infused with the only poisonous snake that can be found in this country – mamushi. From China to Japan take a drink of Habu sake, which includes 13 different herbs and spices and, of course, the snake hub. It is believed that this is the best medicine for the joints and spine.

How and why to drink

Snake venom in this case should not be afraid – he composition is a protein substance, and the protein neutralizes alcohol. However, there were occasions when the snake remained inside alive, and it did not do too well over to the owner of the bottle with alcohol.

A resident of the Chinese city of Sijo, who brought him to Moscow a bottle of snake wine, after its unsealing was bitten in the neck by a hungry snake. The poison in the wound has not got, therefore, the Chinese survived.

For the most part such products are not even the alcohol in the conventional sense. It is often tinctures and balms that are sold in pharmacies. And drink they need not like ordinary alcohol, the stack for the stack and a part or rubbed topically. If you buy wine or vodka with a snake in Asian markets or in the alcohol stores, be careful before use this product.

In some countries it is believed that alcohol with snake venom cures almost all diseases. Check it out for yourself or no matter.
Is the advice useful?
Подписывайтесь на наш канал