What is dry water

Nonsense, but there are "dry water". That is far from a science person seems a linguistic pun, in fact, the hope of mankind for salvation, because "dry water" may soon be to fight the greenhouse effect and harmful gases. 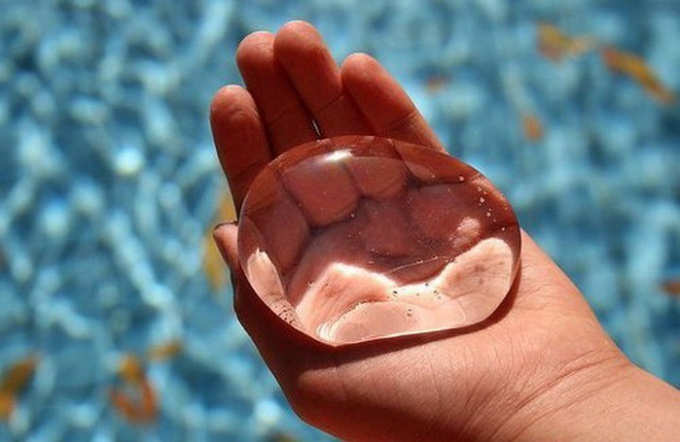 Fires, carried away hundreds of lives in the early 20th century was a disaster for the wooden cities of pre-revolutionary Russia and Europe. The extinguishing water fire, which had spread from roof to roof, the effect is not given, but because the inquiring minds of scientists were determined to find better means of dealing with the fire element.

In parallel with working scientists in a completely different field of knowledge. They were not interested in the security of the citizens, and applied chemical formula which could be the basis for new cosmetic products, saving the female youth. Experiments with the zinc not only failed, but caused the death of many fashionistas, who used white with him. The zinc is replaced by silicon, which has proved itself as a unique absorbent, literally sealing water while preserving its properties.

In 1968 the invention of dry water silicon water and proper patented and began to study. In fact, the connection of water and silicon occurs spontaneously at intensive stirring of the two substances, silicon (white powder) literally absorbs the water and takes the form of capsules. The water of its properties does not lose and does not change.

The cosmetics industry is really a lot bought after the discovery of the effect of "dry water", based on the mixture did powder and a variety of eye shadows, later she went into the composition of cosmetic pencils to make them soft, but not brittle.

The ability of the composition to rapidly absorb carbon dioxide, the same, which is abundantly formed during combustion, have made her one of the most popular compositions for fire fighting. In contrast to usual water dry it was easy to transport, and its effectiveness is many times higher than the efficiency of conventional water.

Studies have shown already the end of the 20th century, the dry powder of water in contact with the gas forms a kind of connection - hydrates, which are useful. Methane hydrate is already known as a fuel of the future.

Moreover, the silicon compound is able to enter into a non-active reaction with methane, which in a free state threat. Today, research is underway that will help in the future to avoid disasters in mining in the mines, as well as to come up with a way to move methane in a relatively safe manner.

Today scientists and researchers are more attracted to the idea of addressing the threat of earth's civilization - the greenhouse effect - using "dry water". Thanks to silicon, which literally seals in a shallow capsule of water, carbon dioxide when working with "dry water" is almost not formed, and this means that working with it can reduce the concentration of harmful substances that Deplete the ozone layer.

A little over 10 years ago in Japan invented to keep "dry water" in liquid form, this composition unique properties: it lost fluidity, while it works well technique does not dissolve and capsulizes oil, such water does not react with soluble in ordinary water.
Is the advice useful?
Подписывайтесь на наш канал