Which actors starred in the film "Caucasian captive"

"Prisoner of the Caucasus" - one of the legendary movies of the Soviet cinema. Simple story about ordinary adventures of a student Shurik made a splash at the box office. This Comedy has more than 45 years, but it continues to watch and review millions of people. 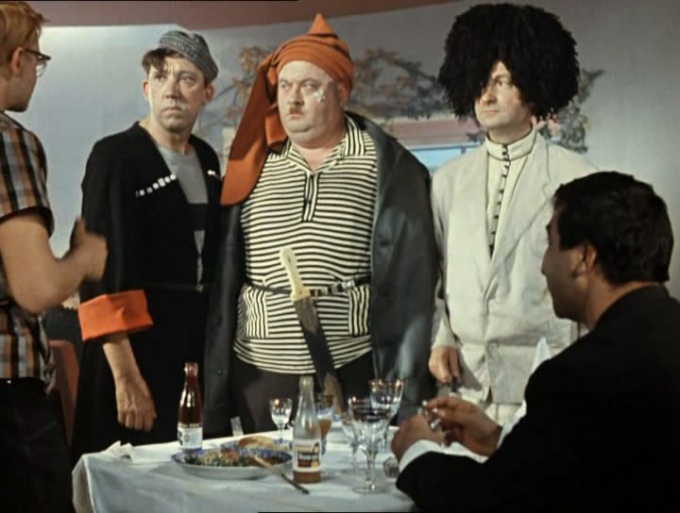 The secret of success movie

"Prisoner of the Caucasus" was published in the Soviet hire 1 APR 1967. The success of the movie was simply deafening. Until the end of the year it looked almost 77 million viewers, which allowed the picture Gaidai to take first place at the box office. The secret of perennial success of this Comedy is simple. It provided a witty dialogue of the characters, the brilliant work of the Director and the cast. Of great importance in the success of the film has a powerful positive charge, which is common to all film works of Leonid Gaidai.

Although the events in the Comedy takes place somewhere in the Caucasus, the filming process is almost entirely took place in the Crimea, mainly in Alushta and its surroundings.

Central to Comedy, besides the Shura, is a legendary Centrica – Coward, Bobby and Experienced - performed by Evgeniy Morgunov, Georgiy Vitsin and Yuri Nikulin. Few people know that after the approval of the script the film crew have any problems with the actors. Immediately two members of the Trinity, Morgunov and Nikulin – refused to shoot "the Caucasian captive". The actors did not like the Comedy. However, the Embassy convinced them that together they podkorrektirovatj scenario.

Looking at the complete idyll on the screen, it's hard to believe that legendary actor Trinity often could not find a common language. The members of the crew in his memoirs said that most unpredictable of actors was Yevgeny Morgunov. After the film "Operation "y" and other Shurik's adventures" came to him "star disease", so the actor did not have to abandon filming in the middle of the working process. Often is Morgunova in the frame you can see similar in body type double.

Leonid Gaidai was trying to get away from scandals on the set. He loved to encourage creative disobedience and improvisation. For each invented the trick, he handed the actor a bottle of champagne, which at that time was in short supply. This prize was awarded Vitsin for inventing the episode with grafting Morgunova and Nikulin for the stage, scratching his feet.

"Prisoner of the Caucasus" it gave people a lot of phrases that later became winged: "memento Mori – Instantly sea", "sorry for the Bird...", "Bambarbiya, kergudu", "in Short, Sklifosovsky!" and many others.

Shurik in the Comedy was played by the actor Aleksandr Demyanenko. After starring in the films Gaidai to him was a real success, however it is not particularly pleasing. Subsequently, a good image of Shura, like the sword of Damocles, hung over the actor, not allowing to go beyond comedic roles.

Prisoner of the Caucasus

The role of the Caucasian captive, "athletes, Komsomol and simply beauty" starred actress Natalya Varley. For the role of Nina Gaidai tried a lot of Actresses, including first beauties, but stopped at Varley. The Director won her extraordinary charm and youthful spontaneity. The actress had little experience. In the movie she came from the circus. On the set of her not everything worked, but the most offensive Varley - she did not work well to announce his heroine. Nina she voiced Hope Rumyantsev, and a song about bears was performed by Aida Vedischeva. Despite this, after the Comedy of Varley has won universal fame.

The role of the hapless groom Nina and head ... by Vladimir Etush. In contrast to the playful Trinity to create even greater comic effect of his character on the screen all the time was extremely serious. Initially, Gaidai wanted Caax was a parodic and grotesque, but Richter was able to convince the Director.

The actor brilliantly played their roles and made the Comedy a unique flavor. In the role of uncle Nina made incomparable Frunzik Mkrtchyan, and his on-screen wife was played by a real actor's wife - Donara Mkrtchyan. Administrator of the hotel, which was the Shura in search of Caucasian folklore, played Mikhail Gluzsky. Gaidai found a role in a Comedy for his wife Nina Pectinate. She played a nurse in a psychiatric hospital. In the role of chief physician was Pyotr Repnin. Driver Edik, who helped his wife escape from the mental hospital, played Ruslan Akhmetov.

After the release of "the Caucasian captive" famous woke up and the ass Lucy. The one which is pursued together with Shurik Nina in the first scene of the film. Jenny was born in 1948. The average life expectancy of these animals is 30-40 years. However, Luce had to live up to 61 years. Last time she rocked the old in 2005, starring in the film Bondarchuk's "9 Rota".
Is the advice useful?
Подписывайтесь на наш канал