Why do Indian brides paint henna different pictures on hands

Mehendi or mehndi is a traditional Eastern painting with henna. In India bio-henna tatoo strengthened in the twelfth century. Almost any Indian wedding bride decorated with the traditional patterns of mehndi from head to toe. 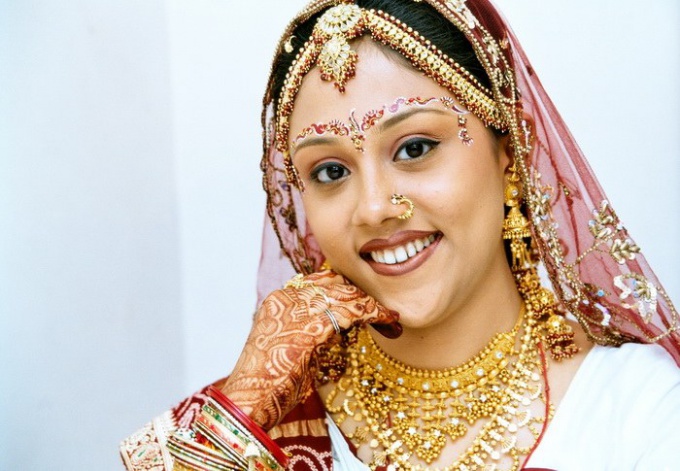 Mehendi on the skin of the bride is traditionally applied to older, experienced cousin. As instruments they use metal or wooden sticks, bringing intricate designs on the hands and feet of bride by hand. On the feet, palms, wrists and ankles henna is most long because the skin in these areas dry and thin. In the process of applying these patterns, experienced women usually devote the bride in the mystery of matrimony. Henna tattoos can last a long time in India, traditionally, until the skin of the bride (and wife) visible wedding pattern, she is released from daily duties and cares.

Usually henna tattoos hold up to two to three weeks.


Mehendi is designed primarily to keep love in marriage. Dark, almost black patterns mehndi talking about a very strong love. Red tattoo promises of power and fertility, made with red henna mehendi usually contain vegetable ornaments, images of animals and birds – all this binds a woman to a cycle of life, with the concept of birth, growth, regeneration and death. It is believed that mehendi protects from evil spirits, misfortune, illness. That is why Indian women cover their body these tattoos not only during the wedding.


In India are very popular complex patterns and ornaments, images of flowers Lotus and peacock are luck and love. That is why on the palms and feet of the bride often depict these patterns.


Indian girls fervently believe that mehendi will bring the love and care of her husband. Indian women believe that the beauty of paintings of the hands and feet should admire their future husband and his relatives. In some regions of India henna to decorate their bodies and grooms.

Mehndi is a good way to contact the gods. Very often in painting hands and feet is encrypted prayers and requests. Very often, Indian brides put on their hands the image of the elephant which is the symbol of Merciful Ganesha – God, who always cared about people.

Henna is considered a good energy protection since they are applied on the palm, in which all a person's energy channels.

Now, not only in India

Increasingly, the tradition is to paint your skin with exotic Oriental figures before important events penetrates into Western society. Pretty easy to see a young girl of the European appearance with flowers or animals, drawn with henna on the hands. Many people make this kind of painting yourself, it takes time and effort, to the same patterns usually do not turn out to be so thin as Indian brides, nevertheless they look impressive, if their Creator has good taste.
Is the advice useful?
See also
Присоединяйтесь к нам
New advices