Where went the tradition of hanging a lock on the bridge

At the heart of any European is a bridge with thousands of locks. The fact is that just twenty years ago, there was a tradition of "bonding" feelings this way. Believes that if lovers hang a lock on the bridge railing, throw the key into the water, nothing will ever be able to destroy the Union of their hearts. 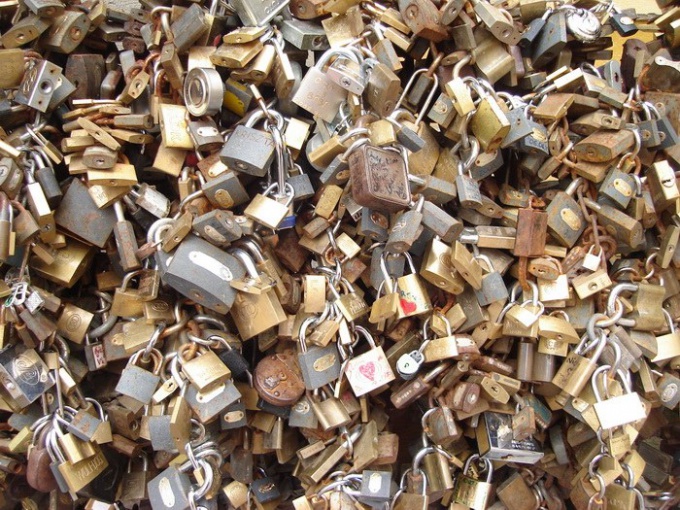 The emergence of a tradition

Despite the fact that this tradition seems to be very romantic and vintage, it appeared only in the nineties. Italian writer Federico Moccia for one of his novels could not invent, as it lovers the heroes swore an oath of loyalty and love each other. Since the action in his novel happened in Rome, he wanted to find a special romantic spot in the Eternal city, and it was not there. Therefore, the author invented their own tradition. He was appointed to Ponte Milvio, this place is for all the lovers of Rome, where his characters are brought to each other vows with a padlock and threw away the key.


Since the Roman Ponte Milvio covered with locks, so to discern it beneath them became difficult. Once under the weight of the locks has fallen lamppost on this bridge. The power of Rome tried to intervene to structure somehow this tradition, but without success. Italian lovers never gave her shelter and continued to hang the locks on Ponte Milvio.


Over time, this tradition spread throughout Europe. And there is swearing in this way can any couple, but in our country, the castles, primarily associated with the wedding. In Moscow, for example, Luzhkov bridge became a place of pilgrimage for half of all young couples of the capital. However, in the case of Luzhkov bridge, the city authorities have been very clever. Near the bridge was established the Tree of love whose branches can withstand thousands of these locks and vows, not causing harm to anyone. After a very short time at the Tree of love there are still a few relatives, because the branches of the same structures all the locks did not fit. Now next to the Trees of love on Luzhkov bridge are also benches for quarreling lovers. Their design assumes that either sat down on the edge of the people will still roll to the center.

The castles with the most popular bridges are cut to free up space for new. So it makes sense to hang your clasp away from the popular places, so it lasted a little longer.

In the Slavic traditions and bridges, and the locks were widely used. After the wedding, when the bride enters into her husband's house, near the threshold have always been an outdoor castle. When young passed inside, the castle is closed, the key thrown into a deep well. Sometimes drowned and the castle, which is metaphorically a marriage.

Until now, many grooms before the wedding move through the seven bridges, because it promises happiness.

Bridges in the Slavic tradition has always been considered a symbol of the transition. Therefore grooms often worn by brides across the bridges to the marriage was a happy one. So the new tradition of locking vows well taken root on Russian soil.
Is the advice useful?
Подписывайтесь на наш канал